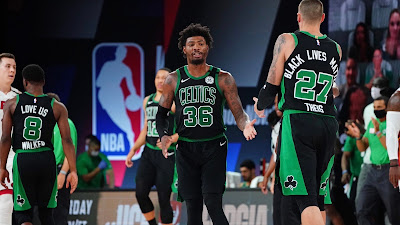 Marcus Smart finally spoke to the media about the Celtics' locker room argument heard around the world following the team's Game 2 loss to the Miami Heat.

After two blown leads, back-to-back losses and trailing 2-0 in the Eastern Conference Finals, arguing could be reportedly heard coming from Boston's locker room Thursday night. Frustration had finally boiled over and fighting amongst each other was a knee jerk reaction to the situation.

But the Celtics proved the naysayers wrong in Game 3, as they dominated the Heat in a 117-106 win to cut their series deficit 2-1.

Smart, who was one of those involved in the locker room blowout, explained why the Celtics bounced back without letting the outside world dictate what actually went on behind closed doors.


"Electrifying, what happened in the locker room," Smart told reporters on Monday. "We're a family, a family fights all the time. I fight with my brothers all the time. But at the end of the day, we can fight with each other and nobody else can. It happens between families, especially a family like ours who has been together so long. It's going to happen.

Jaylen Brown, who also involved in the argument after Game 2, was the only player to offer his feelings on Smart, "He plays with passion, he's full of fire, and that's what I love about him most to be honest."

Smart finally realized that none of his teammates were happy about another loss due to surrendering double-digit lead once again.


"I would have been more worried after that Game 2 loss if everyone was calm, cool, and collected," Smart said. "That would have been a problem. I hate losing more than I love winning. I play with a lot of people who feel the same way, so for us to be able to express that, to get it out, and to build that type of energy for ourselves, because there aren't as many fans here.

"We have our families here, but for the most part they just sit over there, cheer, and it's a different feel," Smart admitted. "You have to bring a different type of energy for yourself and your teammates so for us to be able to find that fuel to get us back on the right track was something important."

While as difficult as the moment may have seemed in that Celtics locker room, Smart believes it was necessary to motivate the team going forward.

The Celtics will look to even their best-of-seven series at two games a piece when they meet the Heat in Game 4 on Wednesday night, beginning at 8:30 pm EST.