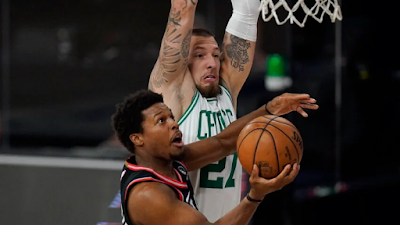 The Celtics looked to forget they missed a golden opportunity to take a 3-0 lead on Friday, but instead let the Toronto Raptors have their way in a 100-93 Game 4 loss to even the series 2-2.

Toronto took full advantage of their momentum following a buzzer beater from OG Anunoby in Game 3 and the Celtics struggled to find their shots, especially from 3-point range -- hitting only 7-of-35 attempts.

Serge Ibaka scored 18 points off the bench on 7-of-9 shooting and Fred VanVleet finished with 17 points, 6 rebounds and 6 assists. Despite the Raptors shooting only 39.5 percent from the field, they put together an even performance on both ends of the floor for the first time against the Celtics in one game.

Jayson Tatum finished with a team-high 24 points on 10-of-18 shooting and grabbed 10 rebounds, while Kemba Walker added 15 points on only nine shot attempts and 8 assists for Boston, who had won six straight playoff games before dropping their last two outings.

Jaylen Brown had his worst shooting display of the postseason -- going 4-of-18 overall and 2-of-11 from behind the arc for a total of 14 points.

Besides Brown, the Raptors also made it tough on Walker, Tatum and Marcus Smart from the perimeter who all shot a combined 3-18 from 3-point territory.

Toronto jumped out to a quick 11-4 lead, after eight quick points from Lowry out of the gate, he finished with 11 to end the first quarter and the Celtics trailed 31-27. After 36 lead changes for the half and a 3-pointer by VanVleet with 0.9 left, it was tied 49-49 at intermission.

Both teams went cold for most of the third quarter, before the Raptors got going from 3-point range to take a 79-68 lead -- their largest of the night and they were up eight to end the period.

While the closest the Celtics would get in the fourth quarter was five, Tatum getting called for an offensive foul with 32 seconds left to play iced the game for the Raptors to give them new life in this best-of-7 second round series.


"We've gotten make the best of our situation, come out, and be ready to fight," said Brown.

The Celtics will have to go back to the drawing board before they face the Raptors in Game 5 on Monday. TNT will have the broadcast at 6:30 pm EST.

Boston shot 44 percent from the field and outscored the Raptors 44-26 in the paint. The Celtics also barely out-rebounded Toronto 53-52.