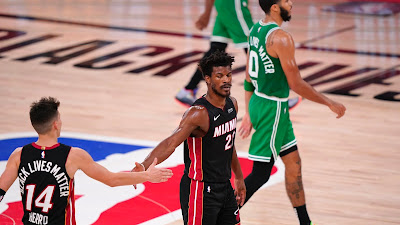 The Celtics are on the brink of elimination, after falling to the Miami Heat 112-109 in Game 4 Wednesday night and now trail 3-1 in the Eastern Conference Finals.

Tyler Herro led all scorers and broke a Heat rookie-record with 37 points on 14-of-21 shooting and 5-of-10 from 3 all off the bench. Jimmy Butler had 24 points, 9 rebounds and Goran Dragic added 22.  Bam Adebayo notched another double-double of 20 points and 12 rebounds for Miami, who are now one win away from making an appearance in the NBA Finals.

Jayson Tatum scored all 28 of his points in the second half on 10-of-22 from the field, 4-of-11 from behind the arc and grabbed 9 rebounds to lead the Celtics. Jaylen Brown finished with 21 points, 9 rebounds and Kemba Walker added 20. Gordon Hayward had 14 and Marcus Smart chipped in with 10 points and 11 assists.

Brown's 3-pointer with 16 seconds left cut Miami's lead 107-104, before Herro went to the free-throw line and hit both freebies to push the Heat back up to five. The Celtics got within two points twice in the final seconds, but Smart picked up his sixth personal foul trying to stop the clock when he grabbed Butler, who made a 1-of-2 free throws with 1.1 seconds left to play.

Boston without any timeouts left, never got a clear shot off to possibly tie the game and send it to overtime.

Herro scored 17 points in the fourth quarter, including five straight to help push the Heat's one-point lead to 91-85. His 3-pointer with 4:09 left to play made it a 98-90 advantage and he hit a layup on a pass from Butler with 56 seconds remaining to cap a 9-3 run and give Miami a nine-point lead.

Moments earlier, Theis scored with 8:44 left to play, putting the Celtics up 85-84, their first lead of the second half and since it was 25-24 with 11:19 left in the second period -- Boston never led again the rest of the way.

Tatum missed his first seven shots before hitting a 3-pointer halfway through the third, to cut Miami's lead to 60-53. Tatum went 6-of-7 for the quarter, scoring 16 of the Celtics' 32 total points and were down 77-76 heading into the final frame.

The Heat have now taken a 3-1 series lead for the 12th time in their franchise history, winning the previous 11 times.

The Celtics will look to avoid leaving the NBA bubble, when Game 5 tips-off on Friday night at 8:30 pm EST.

The Celtics shot 47.6 percent from the field to Miami's 42.9 percent for the night. Despite Boston having 28 assists on 39 made baskets, they committed a total of 19 turnovers with Tatum (6), Smart (4) and Brown (4) leading the way. The Heat finished with only 8 turnovers that resulted in 9 points for the C's

Before tip-off it was announced that Gordon Hayward and his wife, Robyn, welcomed their first son; Gordon Theodore Hayward.