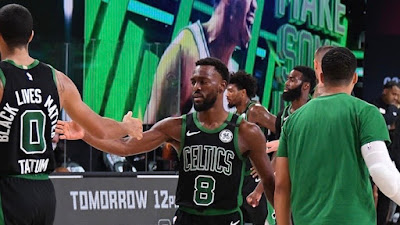 Kemba Walker's veteran leadership came through in the Celtics' 121-108 Game 5 win to keep their season alive on Friday night.
Boston quickly found themselves in a 17-5 hole to start the first quarter and though they beat the Heat 33-32 in the second quarter, it was still a seven-point deficit at halftime.
According to Jaylen Brown, it was in the locker room when Walker spoke to the team.


"What I remember from halftime is Kemba saying, 'We just need to settle down a little bit,'" Brown said of the message. "We all felt the intensity that we all had in the beginning. I don't think we came out flat. It was different from Game 4 for us. We had the intensity; it was just coming out all over the place for us. We just had to dial in a little bit."

The Celtics would go on a 20-5 run to start the second half and eventually take their first lead of the game and never looked back, as they outscored the Heat 41-25 to end the third quarter.


"We got back to playing Celtics basketball," said Walker. "We were just aggressive and just really feeding off each other energy."

Walker's message helped the Celtics let the game come to them instead of trying to do too much and to settle down while making the right plays.


"I think we all realized it," said Jayson Tatum, who had a game-high 31 points and 10 rebounds. "Everybody was so anxious, eager to make a play, make something happen. We know what's at stake - we lose and go home. But at the same time, we've got to relax a little bit. Take a deep breath. We know how important every possession is, but we've still got to just relax a little bit and play the game, and that was kind of the message at halftime."

The Celtics' defensive effort made the difference in the second half, forcing Miami to turn the ball over and grabbing long rebounds -- converting them into points in transition via easy layups or 3-pointers.


"For us, defense is always going to create our offense," said Walker, who recorded 15 points and seven assists. "The goal is to limit those guys to one shot, which is really hard. They've taken advantage of us inside, and we did a good job of keeping them off the glass."

Walker and big man Daniel Theis (15 points, 13 rebounds) were able to break Miami's zone throughout the third quarter and the Celtics disrupted any offense going through the paint -- taking control of Game 5 and outscoring the Heat 71-50 in the final 24 minutes for the victory.

Boston will look to carry that very same focus into Game 6 on Sunday night to extend the Eastern Conference Finals one more time.