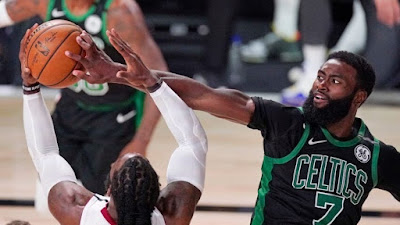 The Celtics staved off elimination Friday night with a 121-108 comeback win over the Miami Heat to now trail 3-2 in the Eastern Conference Finals.
If there's going to be a seventh and deciding bout, then Boston will have to repeat much of what we saw from them in the second half of Game 5 and it starts on the defensive end.

While the Celtics had their worst quarter of the playoffs, going 1-of-12 out the gate to trail 17-5 and shooting 25 percent in the first 12 minutes, Enes Kanter provided a much needed spark once he entered in the second period.

The veteran big man went 4-of-4 in a brief appearance to jump start the rally, as 22 of the Celtics 33 second quarter points came from the paint and Boston only trailed seven at the break.

With the help of a little motivation from Kemba Walker in the locker room during halftime, led to a 20-5 Celtics' run to start the third on their way to outscoring the Heat 41-25 in the quarter after taking their first lead for good.

So what changed between halftime and midway through the fourth quarter that the Celtics outscored Miami 56-31?

Boston attacked the Heat on switches while pressuring the ball defensively on every possession, leading to turnovers and or long rebounds that the Celtics turned into quick transition points via layups or 3-pointers.

Jayson Tatum scored 17 (4-of-6 shooting) of his 31 points in the third quarter, feeding teammates and getting to the free throw line while staying aggressive. Jaylen Brown netted 12 of his 28 points in the fourth quarter, including four 3-pointers made.

The Celtics also figured out the Heat's zone defense in the second half with the likes of Kemba Walker, who scored 15 points and Daniel Theis, who played nearly all of the last 24 minutes in Game 5, scoring 10 of his 15 points, grabbing 10 of his 13 rebounds and blocking three shots in that span.

Essentially Game 5 was a tail of two halves for the Celtics after scoring 51 points in the first 24 minutes, to then outscoring the Heat 71-50 in the final two quarters.

*Bonus fun fact C’s are 7-6 in Game 5s when they have trailed 3-1 in a playoff series#Celtics #Heat #WholeNewGame
— CausewayStreet (@CausewayStreet) September 26, 2020

Boston checked off everything in the list above, especially Tatum who went to the free throw line 14 times, more than doubling his series average of 6.5 attempts. They took care of the ball, only committing 11 turnover versus 19 in Game 4. The Celtics defended the pick and roll well and limited shooters like Tyler Herro (14 points) or  Duncan Robinson (20 points after scoring just three in the second half) from catching fire. Jimmy Butler and Bam Adebayo both were held to 5-of-11 shooting respectively as well.

They also out-rebounded the Heat 60-48, including the offensive glass 13-6 (compared to 12-10 in Game 4) and no Heat player finished with more than eight rebounds (Adebayo and Butler). But most importantly, the Celtics didn't give up a double-digit lead once they grabbed one in the second half.

Even though the Celtics were able to come from 12-points down, they can't play from behind again in Game 6. The key is to remain aggressive from the start, while getting into the paint and finding a way to get the ball into the hands of Jaylen Brown -- who by far has the team's best shooting percentage from 3 at over 54 percent (54.8 percent overall from the field) in this series.

On the opposite side, Boston has to defend the 3 just like they did in Game 5, where they held the Heat to 7-of-36 shooting (19.4 percent) from behind the arc. The Celtics have to win the battle of the boards again and force turnovers (Miami is averaging 13 in two losses) to convert them into fast break points.

Making the Heat work on both ends of the floor will ultimately give the Celtics the best chance to play in a Game 7. Boston not only has the talent to make it happen but there's also no more adjustments to be made at this point.

There will be an NBA game on Wednesday, it's up to the Celtics if they want to be one of teams playing that night.