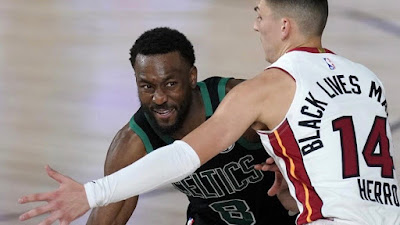 Kemba Walker seems to be in some sort of shooting slump as of late and the Celtics All-Star has acknowledge that something has to change.

Walker shot 6-of-19 from the field, including going 1-of-9 from behind the arc, finishing with 19 points in Boston's 117-114 overtime loss to the Heat on Tuesday night.

Game 1 marked the third straight contest that Walker shot below 33 percent from the field and the fifth consecutive game he hit only one 3-pointer, which is down from his 3.2 makes per-game average (38 percent) during the regular season.

Walker didn't try to sugarcoat anything when it came to his recent poor shooting outings following the Celtics' Game 1 loss.

In Game 6 and 7 against the Raptors in the semifinals, Toronto ran a box-and-one defense that limited the number of open looks for Walker, which has effected his scoring greatly.

Coach Brad Stevens credited the Heat's defense and athleticism on the perimeter that kept Walker from getting any kind of offensive rhythm.


"They've got great athletes out there," Stevens said after Game 1. "I think some of their guards are able to keep in front (of Walker) with their length and Bam (Adebayo) was switching a ton of pick-and-rolls all day. Bam's a tremendous defender."

Stevens was not happy with the ball not moving as much during possessions late in the fourth quarter and extra session.


"We're going to have to figure out, again, better ways to attack, especially late," Stevens said. "I thought we really moved it at times and then we did get stagnant."

Walker couldn't agree with his coach more on late game possessions and execution not being where it should be this deep into the postseason.

Despite Walker's shooting percentage taking a dip over the last few games, his passing has been on point, averaging 6.1 assists and two turnovers during the series against the Raptors, he finished with 6 assists in Game 1. He also gave the Heat their kudos on how they defended, but also mentioned how important it is to move the ball to get better shot opportunities.


"These guys are well-coached, Walker said. "They've got great talent on defense. We've just have to make plays for each other. Just try to make the best decisions possible out there on the court. Like I said, we'll get to the film and I’ll learn from my mistakes and get better."

The Celtics will look to improve on their late-game ball movement and shot selection on Thursday night in Game 2.