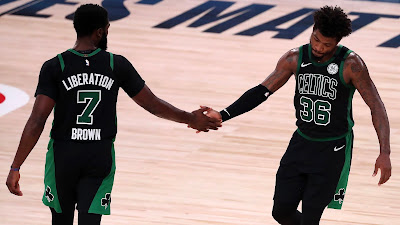 The Celtics locker room was explosive on Thursday night following the team's 106-101 loss to the Miami Heat in Game 2.

There was a reported blowout of players yelling, swearing and it even sounded like objects were thrown. According to Gary Washburn of the Boston Globe, Marcus Smart was at the center of the heated conversation, while players argued for several minutes.


Kemba Walker was asked about it moments later, but downplayed the situation during his postgame video presser.


Jayson Tatum took it a step further when asked about what went on in the Celtics locker room and has the team's frustration boiled over after now being down 2-0 in the Eastern Conference Finals.

Smart reportedly left the arena soon after the shouting match in the the team's locker room and did not speak with the media at all after Game 2.

Shams Charania of The Athletic, reports that Smart stormed into the locker room demanding teammates to be held accountable following the Game 2 loss. Jaylen Brown reportedly "snapped back and shouted that Celtics players must stay together and that their actions must come as a team, not individually, and that Smart needed to cool off. Those sources added Smart had verbal exchanges with a couple of the assistant coaches during the game."

The report also states that the two have already squashed whatever animosity came from the heated argument. After leaving the locker room, Brown was the only Celtics player to address the altercation and his comments confirm that there's no beef with Smart or anyone else.


"I think everything is understood," Brown said. "We're going to have a meeting tomorrow regardless just to watch the film and go over the game plan with coach, but at the end of the day, emotions are going to fly. Obviously we wanted to win this game and we didn't, but this series is far from over and we've got to get ready for Game 3. That's how it goes. In families there's ups and downs, there’s fights and emotions, but that's exactly what we are: A family. We're going to hold each other accountable, and we've got to do what it takes to come out and execute next game."

The Celtics, who have decided not to practice Friday to let cooler heads prevail, are clearly not happy with blown double-digit leads in back-to-back games. In Game 1 they squandered a 14-point fourth quarter lead and in Game 2 let a 15-point third quarter lead vanish -- and got outscored 37-17 in the same period.

While Brown hopes the emotion of what was said behind close doors can be used as motivation in Game 3, he knows it's easy for the media to run with the narrative that the Celtics are coming apart at the seams at the worst possible time.


“I think it's a beauty to it. A lot of people are passionate and emotional, and I'm one of those people," he said. "I recognize it as that. I recognize it as emotion and passion and I don't recognize it as nothing else the media might see it or whatever. That's all it is. It's passion that's being expressed. We've got to express that same passion for 48 minutes. Period."

ESPN's Adrian Wojnarowski tweeted out earlier today, that Brad Stevens had a late meeting Thursday night with Walker, Tatum, Brown and Smart to talk about the post Game 2 locker room incident and work through any emotions that did result in some yelling but not any type of physical confrontation. Among the coaches and players involved, they believed that all issues had been talked about and everyone was ready to prepare for Game 3.

The Celtics will look to avoid going down 3-0 when they meet the Heat again on Saturday night, as tip-off is at 8:30 pm EST.