Jaylen Brown on the Breonna Taylor verdict: 'It doesn't surprise me at all' 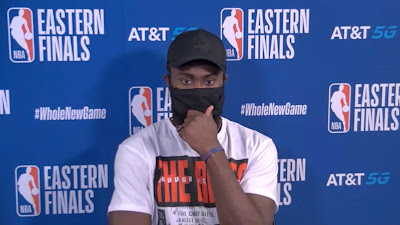 On Wednesday afternoon, several NBA players spoke out on the news that none of the three Louisville police officers involved in the killing of Breonna Taylor would be charged in her death.

A Kentucky grand jury indicted one the three officers, Brett Hankison, on three counts of wanton endangerment which is a felony that carries a maximum jail sentence of five years per count, if found guilty. Hankison, who was fired in June, was charged for shooting into an apartment next door to Taylor.

Jaylen Brown has been one of the many in the NBA bubble that has been very vocal about finding justice for Taylor and several other Black men and woman who's lives have been lost at the hands of social injustice and police brutality. The Celtics guard says though he's disappointed, he was not shocked to hear about the ruling.


"It doesn't surprise me at all," Brown said following Boston's Game 4 loss to the Miami Heat. "Until we dismantle, recreate, or change this system we have, it's going to continue to have victims like Breonna Taylor and others."

Taylor was killed on March 13 by Louisville police officers who broke her door down, while executing to a "no-knock" warrant in search for her ex-boyfriend who was arrested at a different location that same night. One of the officers fired more than a dozen bullets into Taylor's home and five of them hit her while she was asleep.

There was an exchange of gunfire between the officers and Taylor's boyfriend Kenneth Walker, who reportedly had a license to carry and feared that burglars had entered the home.


"It's frustrating," said Jayson Tatum of the verdict. "I kind of felt like we knew what was going to happen. Still when it happens, it's sad. It's frustrating. It's been 194 days and still no justice, still have to fight for the same thing. And, it's a lot to process. It's a tough day for all of us."

The social unrest around the nation continues to grow as there's been protests (peaceful and violent) and riots over the past six months.