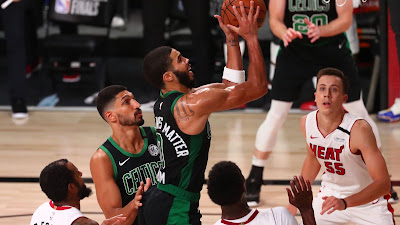 The Celtics live to see another day, as their season was on the line and they survived the Miami Heat in a 121-108 Game 5 victory Friday night.
Jayson Tatum finished with a game-high 31 points, including going 12-of-14 from the free throw line, to go along with his 10 rebounds and 6 assists. Jaylen Brown scored 28 points on 12-23 shooting, 4-10 from behind the arc and grabbed 8 rebounds for the Celtics, who cut the series deficit 3-2 and avoided elimination.
Daniel Theis recorded a double-double of 15 points, 13 rebounds and Kemba Walker added 15 points and 7 assists. Marcus Smart had 12 points, 8 rebounds and 8 assists, while Gordon Hayward chipped in 10 points.

Goran Dragic scored 23 points before fouling out with 4:27 left for Miami, and 20 points from Duncan Robinson. Jimmy Butler scored 17, Tyler Herro and Jae Crowder each netted 14 and Bam Adebayo struggled on 5-of-11 from the field for 13 points.

Tatum scored 17 third quarter points as the Celtics used a 20-3 run to begin the second half, taking their first lead of the game. Walker capped a separate 7-0 spurt with a 3 to push Boston's lead into double-figures with 4:26 left in the period, before outscoring the Heat 41-25 to take a 92-83 advantage into the final frame.

Boston began to run away in the fourth following back-to-back 3-pointers by Brown that turned an eight-point edge into double-digits again, to make it 103-89 with 8:05 left to play. The Celtics led by as many as 19 and Miami never got closer than 11 the rest of the way.

Miami jumped out to a 17-5 lead to open up the game, while Boston missed 11 of their first 12 shots. The Heat, who never trailed in the first 24 minutes, limited the Celtics to 40 percent shooting and led 58-51 at the break.

The C's will look to extend their stay in the NBA bubble one more time, as Game 6 of the Eastern Conference Finals is set for Sunday night at 7:30 pm EST.

Game Notes:
Boston turned the ball over 11 times, a vast improvement from 19 in Game 4. They also forced 13 Heat turnovers, compared to eight on Wednesday night. Marcus Smart finished with four of the team's seven total steals, while Daniel Theis led the C's with three blocks.  The Celtics outscored Miami 56-48 in the paint and out-rebounded them 60-48.