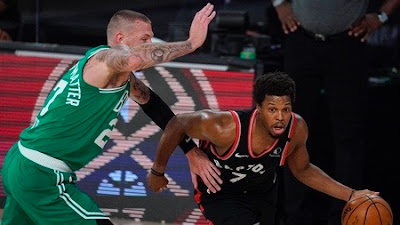 Kyle Lowry refused to let the Raptors go down without a fight, as the defending NBA champions forced two overtimes and a Game 7 against the Celtics with a 125-122 win to tie the series 3-3 Wednesday night.

Lowry hit an acrobatic jumper with 11.7 seconds left in the second overtime on his way to 33 points on 12-20 shooting (8 rebounds, 6 assists) to extend Toronto's lead for good. The Raptors All-Star guard played 53 out of the game's 58 total minutes and for the third straight time played the entire second half.

Norman Powell scored 23, including a three-point play with about 39 seconds left and a pair of free throws to help ice the game. VanVleet had 21 points for the Raptors to go along with 9 rebounds and 7 assists, while OG Anunoby recorded a double-double of 13 points, 13 rebounds and Serge Ibaka also added 13 points off the bench in Game 6.

Jaylen Brown, who had a bounce back performance in Game 5, put up 31 points and grabbed 16 rebounds to lead the Celtics -- which had their starters on the floor for the final 22-plus minutes, without one substitution.

Jayson Tatum finished with 29 points, 14 rebounds and 9 assists. Marcus Smart notched a triple-double of 23 points, 11 rebounds and 10 assists, but missed a 3-pointer that would have tied it with 1.5 seconds left on the clock in the second extra session.

It was the first time that a team forced multiple overtimes in an elimination game and won since April 30, 2009 -- when the Chicago Bulls forced Game 7 after beating the Celtics 128-127 in triple OT, despite Boston winning the series and advancing to the second round in that postseason.

Daniel Theis shot 9-of-11 from the field for 18 points, as he played 47 minutes — the other four Boston starters, Tatum, Smart, Brown and Kemba Walker (who was held to only five points on 2-of-11 shooting), all played at least 50 total minutes in Game 6.

Boston barely lead at the half 52-48, after the Raptors ended the second quarter shooting 9-of-15 to get within four. Toronto took it's first lead of the second half following a Marcus Smart flagrant foul call on VanVleet while shooting a 3.

VanVleet made all three free-throws then hit a 3-pointer on the next possession and followed that up with a second 3, to give Toronto a 9-0 run and a 67-62 lead with 6:58 left in the third. The Raptors maintained a lead for the rest of the period and until the 7:31 mark in the fourth.

The Celtics trailed 98-94 with 4:42 remaining in regulation, but the Raptors failed to score for the rest of the period. Smart grabbed a rebound with 25.4 seconds left and Walker missed a running layup to go up two. With the game tied 98-98 and 0.9 left on the game clock, Pascal Siakam missed a 3 to win it for Toronto.

In the first overtime Brown hit a pair of free throws to knot it up 106-106 and with 18.9 seconds left the Raptors went to Powell for a 3-pointer but missed the 28-foot pull-up jumper as time expired.

Theis broke a 115-115 tie on an alley-oop dunk to put the Celtics up two with 1:10 left in the second overtime session, before the Raptors used a 10-5 run to end the game -- including a 3-pointer by Anunoby, a three point play and two additional clutch free throws by Powell and an 14-footer from Lowry.

Tatum turned the ball over with 41.9 seconds remaining and the Raptors led 118-117, before he hit a floater and 3-pointer. But, it was not enough as the Celtics were down three when Smart missed the game-tying 3-pointer with 1.5 seconds left to play.

While the Miami Heat are comfortably awaiting their Eastern Conference Finals opponent, Boston will look to close out the Raptors on Friday night -- Game 7 is scheduled for a 9 pm EST tip-off on TNT.