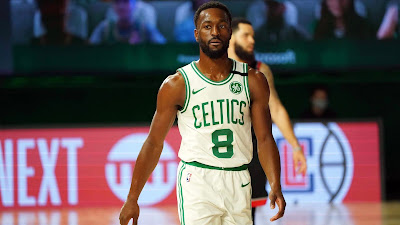 All-Star guard Kemba Walker took blame for the Celtics Game 4 loss to the Toronto Raptors on Saturday night and believes the team got in their own way from take a commanding 3-1 series lead.

Boston was outscored 32-24 in the second half and ultimately fell 100-93, as this Eastern Conference semifinals best-of-7 is now tied at two games apiece.

Walker, who was coming off a 29-point performance on 9-15 shooting and 4-7 from behind the arc in the Celtics' heartbreaking Game 3 loss, only took nine shot attempts for 15 points, while going 1-6 from 3 in Game 4 and was disappointed in his play while promising to do things better going forward.

The Celtics put up their worst 3-point shooting display of the season, hitting only 7-of-35 attempts from 3 in Game 4.


"It's tough," Walker said. "Obviously, we didn't want to come out that way but it just happened, just have to clean it up. We got to find a way, man. Got to be better, I have to be better. I have to find a way to get my teammates at a higher intensity and I will. I'm going to try my best to bring the best out these guys."

Walker was asked if he believed if the Celtics mental aspect of losing the way they did in Game 3, when OG Anunoby hit a buzzer beater -- affected the way the team came out against the Raptors on Saturday.


"I agree, Walker said. "It definitely was sef-inflicted but you can't take away from what those guys did. Those guys [Raptors], they played really well. They were super aggressive, they made great plays, they had great intensity throughout the whole game. I thought we just didn't match those guys' intensity. It's the playoffs, man. We just got to be better -- that's it."

Now with a pivotal Game 5 scheduled for Monday night and a 3-2 lead on the line, the Celtics will have to head back to the drawing board and figure out their next move after blowing a two-game series advantage.