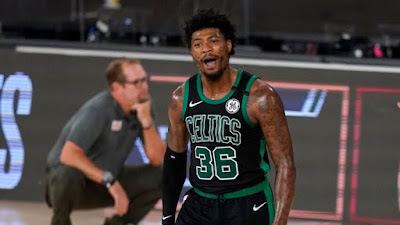 Marcus Smart left his mark once again, as the Celtics stole Game 2 from the Toronto Raptors to win 102-99 and go up 2-0 in their second round best-of-7 series on Tuesday night.

With Boston down 78-66 with 2:46 left in the third quarter, the Celtics would go on a 27-9 run in the next 10:39, which included Smart hitting five straight 3's in a span of three minutes to open up the fourth quarter. On Smart's last made 3 -- he converted it into a four-point play that put the C's up for good with 7:55 left.

The Celtics took an 86-85 lead, which was their first of the second half, behind 16 unanswered points from Smart, who finished with a total of 19 points on 6-11 shooting from behind the arc to go along with 3 rebounds, 2 blocks and an assist.


"He does whatever needs to be done to win," coach Brad Stevens said of Smart's performance. "Tonight, we needed a little jolt offensively. We missed some open shots against that zone at the end of the third, early fourth. But then he made a bunch in a row and loosens up the D."

Boston outscored the Raptors 32-21 in the final frame with Kemba Walker (11 points in the fourth) and Jayson Tatum (5 points) hitting key shots to secure the victory.

Smart's last play and his biggest of the night came when he knocked the ball out of Pascal Siakam's hands while the Raptors forward was driving in the lane with 35.1 seconds remaining.

Siakam turned the ball over when he stepped out of bounds while gathering to shoot a 3 on the very next possession.

Stevens knows and understands how important Smart has been to the Celtics since the veteran's arrival seven years ago.


"Marcus has been a winning player since he's gotten here," Stevens said. "I've said many times that we've been in the playoffs every year since he's been here and that's not a coincidence."

So far in this series, Smart is shooting 12-23 from the field and 55-percent from behind the arc (5-9 in Game 1) for a combined 40 points in two games. More than half of his shots have been 3's versus the Raptors, while that was not the case against the more physical Philadelphia 76ers in round one. In four games last series, Smart shot 2-15 from 3 and scored a total of 34 points.


"Last series against Philly, we had guys like Jayson and Jaylen (Brown) who were really rolling," Smart said. "My touches on the offensive end were limited, which is okay because we're so versatile and talented.

"I just have to do what I have to do, and that's play defense and do all the little things I could to help my team win. Same thing this series, just tonight my team needed more scoring from me and I brought it."

Smart's performance didn't go unnoticed by his Celtics teammates as they also praised him following the win in Game 2.


"There's only one Marcus Smart," Kemba Walker said. "I'll tell you that much right now. There's only one. Different beast. That dude is unbelievable. He's a monster.

"That's just a will to win, man. And he brings that to our team," Walker added.

Tatum led all scorers with with a playoff career-high 34 points, but called Smart's fourth quarter shooting performance "amazing" and said it gave the team "a spark when we needed it."

Smart and the Celtics will look to make it a 3-0 series lead when Game 3 against the Raptors tips-off Thursday night.