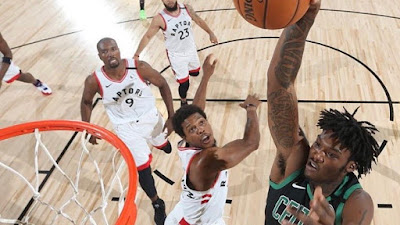 The Celtics wings and guards have gotten plenty of attention during the course of the 2019-20 season. But after a 112-94 blowout win in Game 1 over the Raptors, Boston's bigs should finally get some love too.

The tag team of Daniel Theis and Robert Williams combined for 23 points, 20 rebounds, four blocked shots and two steals, while also limiting Toronto's frontcourt duo of Marc Gasol and Serge Ibaka to just 7-of-17 shooting from the floor on Sunday afternoon.

For Theis, who grabbed a playoff career-high 15 rebounds (13 defensive boards) in Game 1, the Celtics starting center recorded a total of 15 rebounds in the first round versus the 76ers, as he had to battle arguably the league's best center in Joel Embiid.


"It's a different series than against Philadelphia," Theis said after Sunday's win. "Joel was down there the whole time. I had to box him out so other guys could grab the rebound. This series right now, I have the chance to just grab rebounds so we can (get out in transition and) play fast."

While Theis' strength was tested against Embiid and the Sixers, this time around his quickness was on display versus the Raptors, as he clearly had to make adjustments in Game 1.


"That was the emphasis of the whole week," Theis said of Toronto's drives. "Kyle Lowry is great at drawing fouls and going downhill to the basket against the big guys. We have to put our hands back to make him finish over us. We did a pretty good job overall. We didn't give up easy shots, especially in the first half. We played great defense and didn't give up any easy shots."

Theis took care of the defense in the paint and Williams focused on getting easy buckets on the offensive end. After checking in halfway through the first quarter, Williams immediately made an impact with a pair of dunks and the Celtics led 39-23 to end the first quarter.

With the absence of Gordon Hayward in the lineup and Marcus Smart inserted in his place, the Celtics are going to need that spark off the bench against a deep roster like the Raptors.


"Rob is one of those guys where he comes in and he changes the game, just his presence," said Marcus Smart, who finished with 21 points, along with Jayson Tatum. "His athleticism is ridiculous. He adds more athleticism and more height to our team and allows us to do a lot more on that defensive end where we can get up into guys, pressure guys, because we know we've got a guy like him in the back protecting us. Not only that, on the offensive end, a guy you can throw the ball to, come up with some costly rebounds for us, put-backs and things like that, and just really opens the floor for us guards."

The Celtics starting backcourt (Kemba Walker and Marcus Smart) and wings (Jaylen Brown and Jayson Tatum) combined for 76 points on 27-57 shooting, including 14-32 from behind the arc.

Willams played a total of 22 minutes in four games during the last series against the 76ers, as Enes Kanter -- who didn't play in Game 1 against the Raptors, had a significant role against a more physical Sixers' frontcourt. Williams on the other hand faced a smaller and quicker Raptors front line, putting up 10 points and 5 rebounds in 19 minutes of action.

Despite the inconsistent playing time for both Williams and Kanter not being ideal, they have bought in to what Brad Stevens is trying to accomplish on a game-to-game basis.


"It really has been hockey sub mentality and everybody's just willing to play their role," said coach Stevens. "For Rob, we sit him most of the Philly series, but know that if we play in this one, he's probably going to get a chance to play. Enes doesn't get a chance to play today; doesn't say anything about how good those guys are, it's just the way that we match up. Everybody's got a role to play, we've gotten great play from our centers all year because they complement our other guys extremely well."

The Celtics will needed that unselfishness and the willingness to be ready when called upon attitude  to continue throughout the series, as Game 2 is on Tuesday night.