Kemba Walker on his Game 6 performance: 'I really just couldn't find a rhythm' 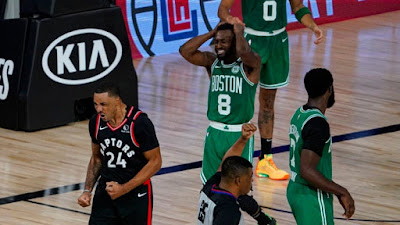 With Boston being up 3-2, the defending champions avoided going home and forced a Game 7 with a 125-122 double overtime victory Wednesday night.

While the Celtics were on the losing end of what some are already calling 'an instant classic,' there's absolutely no shadow of a doubt that Game 6 was as competitive as it gets when it comes to the postseason.

Jaylen Brown, who lead the Celtics with 31 points on 11-of-30 shooting (career-high in shot attempts) from the field, to along with 16 rebounds, looked at Game 6 has an opportunity for him and his teammates to learn from.


"Definitely a great teaching moment for this group," said Brown, who was 4-of-13 from behind the arc. "We had a lot of opportunities down the stretch. We didn't take care of the ball as well as we needed to. That's fine.

"It's the NBA Playoffs," Brown added." We felt like some calls, some things got away from us. But let's come out ready to play. It doesn't get much better than this."

One of those "opportunities" came late in regulation, when Kemba Walker drove the lane and missed the game-winning layup with 3.5 seconds left in the fourth quarter. He appeared to get hit by OG Anunoby on the arm but no call was made and Toronto got the ball back for the final seconds of regulation.

Walker looked upset for the lack of a call, but didn't address it with the media when asked about the missed layup and a possible foul that was not called.


"I just missed a layup, I guess," Walker said after the game, refusing to speak negatively about the officials and possibly get fined.

But according to the NBA' Last Two Minute Report, the referees did miss that crucial foul call on Anunoby when he hit Walker across the arm while the Celtics guard was going up for the potential game-winning layup attempt.


The NBA's Last 2 Minute Report says two crucial calls were missed in last night's 2OT thriller between the Celtics and Raptors, both against Boston.


That missed layup by Walker, foul or not, was one of nine shots he didn't connect on -- going 2-of-11 on the night for 5 points, after coming off a bounce back performance in Game 5.

Stevens didn't put any blame on his All-Star point guard for the poor shooting display, but instead credited the Raptors' box-and-1 defense that allowed Walker to only put up three shot attempts in the first half.


"In the first half, that's really not fair to Kemba because they're in a box-and-1, playing on top of him and we're getting great shots against it throughout the entire first quarter," Stevens said. "So in that time, his job is to either be a spacer or a cutter or a screener and watch everybody else score. When they get out of it, he gets better opportunities himself. So that's not on Kemba and anything about the three attempts in the first half or anything. They took him away, that's a great sign of respect."

Walker also had high praise to the Raptors' defense on him, but also took the blame for not getting into any kind of rhythm offensively in the second half.

Despite the Celtics missing a chance to knock off the Raptors on Wednesday, the mental toughness seems to be present as they await Game 7.


"Why wouldn't I be?" Walker said when asked if he felt confident going into Game 7. "We've got great players. We're really competitive. That was an awful game right there. We could've gave up, but we didn't though. We fought hard. We made plays the whole game. It took two overtimes. So yeah, I’m confident. We've got a good group of guys. We love playing basketball with each other. We love making each other better. I know we'll respond."

Make sure to have your popcorn ready, as the Celtics and Raptors meet on Friday night in a win-or-go home Game 7, which will tip-off at 9 pm EST on TNT.

Will Boston finally clinch the series or will Toronto pull off the comeback all for a chance to go head-to-head with the Miami Heat in the Eastern Conference Finals?