How Game 3 was a character-building win for Brad Stevens, Celtics 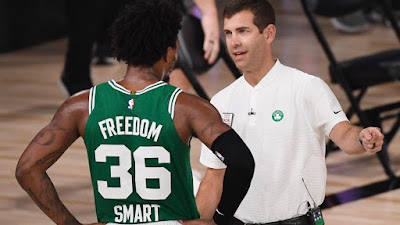 It wasn't an easy 48 hours for the Celtics following another blown double-digit lead and loss in Game 2 to the Miami Heat.

Tensions ran high in the locker room after being down 2-0 and reportedly words were said, players had to be separated and even things were thrown apparently. But regardless of how the Celtics may have appeared to the outside world Thursday night, they used each other as motivation and came out being aggressive in their wire-to-wire 117-106 win in Game 3 two days later.

Jaylen Brown, who admitted he hadn't gotten much sleep during that time, after a reported argument with teammate Marcus Smart, noted on Saturday that the incident was "blown out of proportion."


"We are in a bubble," said Brown after the win. "There's a lot of grown men. There's a lot of passion and emotion going on. But at the end of the day, we're a family. We represent this organization. We represent each other and we won't ever let anything come in between that. We've got a tremendous opportunity and we understand that and nothing's going to stop us from trying to maximize that."

Celtics coach Brad Stevens viewed Game 3 as a character-building win for his roster following the frustration of surrendering two huge leads in back-to-games to start the series finally boil over and ultimately how they responded.


"This result didn't really matter to me," Stevens told reporters. "It was more about what are we going to show ourselves to be. I thought we were a really special group, a really good group, and the first time that we were pushed to more emotions that challenged us, we got better. And that's encouraging."

Brown (26), Jayson Tatum (25), Kemba Walker (21) and Marcus Smart (20) combined for 92 of the Celtics' 117 total points -- as they were also the four team leaders that Stevens had a reported late-night meeting with, following the locker room blowout.


"We just made the plays that were presented to us," said Kemba Walker. "It felt good, you know? Whenever we had opportunities to drive and kick, we did and guys were just being aggressive, really. Just making the right plays and that’s what it takes to win."

Stevens was asked what went into getting his team to keep it together in Game 3 with all the drama surrounding being down two games in the series.


"Just a bunch of good people committed to each other," Stevens said. "There's no special talk, no special things, no rah-rah speeches. It's who you have in the locker room and are they committed to each other. Everybody gets pushed to emotions in sports. That's why I was curious to see what would happen tonight, but I didn't have much doubt. I think this group has some good character."

Brown agreed, especially with the notion that team chemistry always plays a factor and when the Celtics play together they're tough to beat.


"It was about honing in, focusing," Brown said. "There's some great guys in that locker room. A lot of emotion, a lot of passion, but we're a family. We're here for each other at the end of the day. We exemplified that when we came out, together. We stayed together.

"There were some tough moments… but we didn't hang our heads. We kept our will high and persevered to win this game," Brown added. "I'm glad to be apart of this team and this organization, and I'm proud with how we responded."

Gordon Hayward returning to the lineup also played a huge part in the Celtics' Game 3 win, as they look to even this Eastern Conference Finals series at two games a piece come Wednesday night.