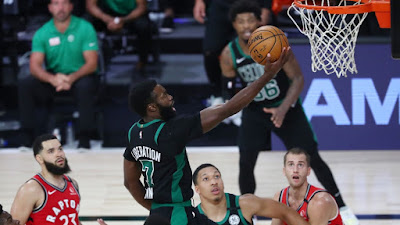 Jaylen Brown bounced back nicely from a not so great shooting performance in the Celtics' Game 4 loss on Saturday night.

So what adjustments did Brown make in order to turn it around and help the Celtics win two days later? According to the young veteran, nothing.

Brown went 0-of-9 from 3 in the first three quarters of Game 4 before knocking down his first made 3-pointer midway through the fourth. In Game 5, his confidence didn't falter, as he took the same amount of overall shots and hit 3-of-7 from 3-point territory, despite having a bad shooting night two days prior.

While Brown says he didn't change his approach between Game 4 and 5, he did mention the simple message from the Celtics coaches before the start of Game 5 helped the team.


"I believe my coaching staff and my organization believes in me, so we just got to keep going," Brown said. "I didn't change anything, really. The emphasis, I would say, was less is more. Just keep making the simple plays, hit singles and that paid off."

The Celtics first shot of the game was a Brown 3-pointer 19 seconds into the first quarter, which gave Boston it's lead for good and Brown remained aggressive, setting the tone early for the rest of the team.


"Jaylen's got big-time character. He's got competitive character," coach Stevens said afterwards. "He works, he's focused. He wants to do well. It was good to see him knock in that first one. I think it wouldn't have mattered if he had missed a couple early. He was going to be aggressive, which is good for our team."

With 3:24 left in the first quarter, Brown made the game's highlight play when he caught a pass from Marcus Smart halfway into the paint and while going up for dunk, posterized OG Anunoby, who hit the buzzer-beating 3 in Game 3, to put the Celtics up 18-5.


Brown was asked if he put a little extra sauce on that particular dunk because it was Anunoby who tried to guard him, but the Celtics wing just credited it to his aggressiveness that he had started the game with.

Though the Celtics made a statement with their 22-point win, pushing the Raptors to the brink of elimination, no one should pencil the team into the Eastern Conference Finals just yet.


"It don't say nothing," Brown said on what the team's Game 5 victory says. "We got to get ready to play tomorrow. The job's not finished yet. We still got a lot of work that needs to be done."

Game 6 between the Celtics and Raptors is scheduled for Wednesday night at 6:40 pm EST on ESPN.