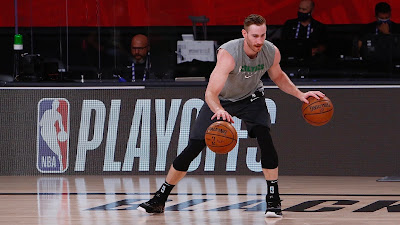 The Celtics remain optimistic that Gordon Hayward will be available Saturday night against the Miami Heat.

According to ESPN's NBA insider Adrian Wojnarowski, aside from any setbacks during the team's pregame warm-ups, Hayward will play in tonight's Game 3.


Hayward has missed more than a month with a Grade III right ankle sprain, but has responded well to workouts over the last few days, as the Celtics trail 2-0 in the Eastern Conference Finals best-of-seven series.

The Celtics upgraded Hayward to "questionable" on Friday night's injury report and earlier this week was listed as "questionable" prior to the team's Game 2 loss, but was scratched out before tip-off.

Hayward injured his ankle on August 17 and left the NBA bubble to rehab at his Indiana home, before returning and clearing quarantine last Friday. The Celtics forward was seen putting up shots pregame prior to the team's Game 7 win over the Raptors and coach Brad Stevens told the media postgame that Hayward would be "back at some point" in the series against Miami.

Despite missing the last 12 playoff games, Hayward has had a bounce back season averaging 17.5 points, 6.7 rebounds and 4.1 assists. Boston definitely missed his 50-percent shooting from the floor and 38 percent from behind the 3-point arc production.

On Friday, Wojnarowski also reported that part of Thursday's late-night meeting with Boston team leaders, following the post Game 2 locker room blowout, was Stevens wanting to make sure the Celtics bringing Hayward back into the lineup is a smooth transition and they are hopeful he can play a vital role off the bench in Game 3.

Whether Hayward returns or not, the Celtics will look to avoid a 3-0 series deficit tonight when they take on the Heat beginning at 8:30 pm EST.