Gordon Hayward is listed as 'questionable' for Game 3 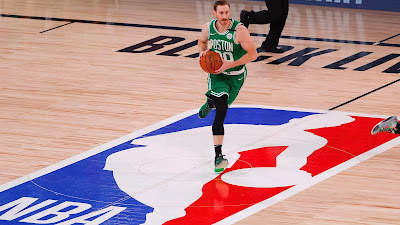 The Celtics have listed Gordon Hayward as "questionable" ahead of Game 3 of the Eastern Conference Finals.

The team released their injury report for Saturday night and the chances of a possible Hayward return looks good for Boston, who fell 106-101 in Game 2 to the Miami Heat and now trail in the series 2-0.


Hayward suffered a Grade III right ankle sprain in the Celtics' Game 1 win over the Philadelphia 76ers back in the first round and has not played since. He was expected to be sidelined at the very least four weeks and this past Monday marked the four week period -- which was the last time coach Brad Stevens gave an update on Hayward's injury.


"He didn't go through our normal practice," Stevens said on Monday. "He looked good while he was going through it, but there's a big difference between doing that and actually getting into a game. I don't know what that officially means moving forward, but he's getting better."

The team upgraded Hayward to "doubtful" before Game 2 but officially scratched him just before tip-off and that was the first time he had been listed anything other than "out" since his injury. This time around there's seems like real chance Hayward could play Game 3 if he feels good on Saturday. If he doesn't play, the chances would increase even more due to a three day layoff before Game 4.

Hayward has missed 12 playoff games since injuring his ankle on August 17 and the timing was unfortunate, as he was playing some of his best basketball of the season, especially during the seeding games.

According to ESPN's NBA insider Adrian Wojnarowski, part of Thursday's late-night meeting following Marcus Smart's spat with his teammates in the locker room, was Stevens wanting to make sure the Celtics bringing Hayward back into the lineup is a smooth transition and they are hopeful he can play a role off the bench in Game 3.

The Celtics will look to avoid a 3-0 hole against the Heat with or without Hayward when they play Saturday at 8:30 pm EST.