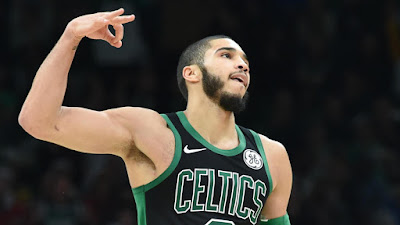 Jayson Tatum has reached yet another career milestone at age of 22-years and 163 days old.


Tatum becomes the youngest in franchise history to receive All-NBA honors, joining Ed Macauley (22 years old and 361 days), who was selected All-NBA First Team back in 1951 and is also the first Celtic since Isaiah Thomas (All-NBA Second Team) in 2017 to receive such league wide recognition.

The Celtics forward also made his first All-Star appearance this year and was named Player of the Month back in February.


Tatum received 32 second team votes, tied with Jimmy Butler for the most of any player on the third team. He finished 15 voting points behind Pascal Siakam. pic.twitter.com/0SzTORN1kt
— Chris Grenham (@chrisgrenham) September 16, 2020


Tatum has improved on his regular season average so far in the playoffs, leading the Celtics with 25.7 points and 10.4 rebounds, while also dishing out 4.3 assists per game and currently playing in his second East Finals.

With this All-NBA nod, Tatum would be eligible for a "Super Max" extension, also known as the Derrick Rose Rule, meaning the third-year forward can sign a five-year extension that could pay him up to 30 percent of the salary cap instead of a typical "max salary" rookie-scale extension that would pay him as much as 25 percent.

According to A. Sherrod Blakely of NBC Sports Boston, Tatum's base salary of a potential super-max extension, which wouldn't kick in until the start of the 2021-22 season, would be worth $37.5 million in year one and $215 million for the duration of a five-year contract.

Tatum, the No. 3 pick for the Celtics back in 2017, is the only player from his draft class to already have an All-NBA selection under his belt, while being the best player on a championship contender.

Boston trails in the Eastern Conference Finals 1-0 to the Miami Heat and resume their series Thursday night at 7 pm EST on ESPN.