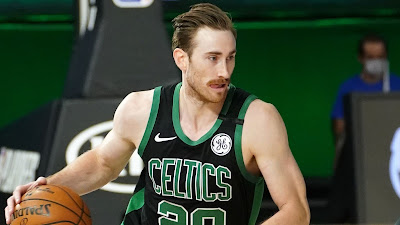 The Celtics are trailing in their Eastern Conference Finals series 1-0 to the Miami Heat and help could be on the way "sooner, rather than later."


#NEBHInjuryReport for Game 2 vs @MiamiHEAT:


Hayward suffered a Grade III right ankle sprain in the Celtics' Game 1 win over the Philadelphia 76ers back in the first round and has not played since. He was expected to be sidelined at the very least four weeks and this is the first time that the former All-Star forward was has been listed anything other than "out" since the injury occurred.

Coach Brad Stevens told the media following the Celtics' Game 7 win over the Toronto Raptors, that Hayward would likely be available at some point against Miami. Hayward was seen putting up shots during the team's pregrame warm-ups on Friday night.

Getting a veteran like Hayward back into the Celtics lineup whether as a starter or off the bench would be a great asset to have against a deep Heat team. His versatility as a scorer (mid-range or 3-point shooter), playmaker on or off the ball brings a different dynamic to Stevens' offense schemes and opens up the floor as well.

The Celtics look to even the series tonight, as Game 2 will tip-off at 7 pm EST.