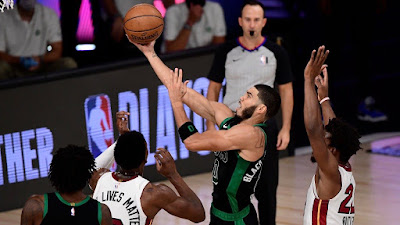 If you haven't heard by now, Jayson Tatum game-tying dunk was blocked by Bam Adebayo in the closing seconds of the Celtics 117-114 overtime loss to the Miami Heat in Game 1 Tuesday night.

Despite Tatum leading all scorers with 30 points, it took him 24 shots to get there and he also went 4-of-12 from behind the arc, missing his last seven field goal attempts at the end of the fourth quarter and extra session -- including a potential game-winner in regulation and a game-tying 3 to send it to a second overtime.

Tatum's shot selection wasn't the greatest, especially at the end of the fourth period when the Celtics surrendered a 14-point lead. With the game tied 106-106 and the clock winding down from 22 seconds, Tatum received the ball and got a screen from Kemba Walker and got the smaller Derrick Jones to switch on him as opposed to Jimmy Butler.

Instead of taking advantage of the height difference, Tatum decided to launch a 30-foot 3-point fadeaway for the win and front rimmed it, sending the game to an unnecessary extra five minutes.

After a Butler 3-point play put the Heat up 116-114 with 12 seconds left in overtime, Tatum was summoned once again.

Tatum received the ball and got Butler to switch onto him, but drove pass the Heat All-Star as he cradled the ball and gathered himself to what looked like was going to be an easy game-tying dunk, until Adebayo made arguably the best play of the postseason -- when he met Tatum at the rim to reject it and preserve Miami's two-point lead with 2.5 seconds left on the game clock.


THIS ANGLE 🤩@Bam1of1 with the GAME-SAVING BLOCK for the @MiamiHEAT! #PhantomCam


"I like both shots that I got," said Tatum, who went 2-for-10 from the field in the fourth quarter and overtime. "I just missed one and they made a great play at the rim on the second one. I just take whatever the defense gives me."

Adebayo was fouled after blocking Tatum's dunk attempt and with the Celtics in the penalty, he went to the free throw line. He went l-of-2 from the line, giving Boston a fighter's chance at an attempt to tie the game with no timeouts remaining and Tatum was given a third try to save the night.

Tatum caught a pass from Marcus Smart, who was able to connect on a pass from underneath the Celtics' hoop to him. Tatum fell while catching the ball but was able to get up and get another 3-point shot off to tie the game in the closing seconds, but once again missed and the game was over.

In the final two minutes of regulation and overtime combined, Boston shot 3-of-10 from the field, something Celtics coach Brad Stevens acknowledged had a lot to with the Heat playing great defense


"Not only was there probably too much hounding of the ball, but also not as much space with the way they were guarding," Stevens said in his postgame presser. "So, we need to do a better job with that. We'll go back and look at different ways we can attack better at the end of the game."

Stevens, Tatum and the rest of the Celtics will look to even the series come Thursday night in Game 2, which is schedule for a 7 pm tip-off EST on ESPN.