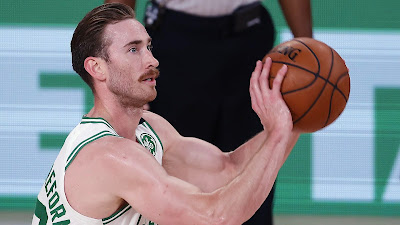 Stevens added that Hayward would return to Orlando once he's close to playing and of course if the Celtics are still in the playoffs.


#NEBHInjuryReport Brad Stevens says Gordon Hayward has returned home and that the plan is for him to return to the bubble when he is nearing a return to the court.
— Boston Celtics (@celtics) August 23, 2020


Hayward, who is expected to miss approximately four weeks, spoke for the first time with the media on Thursday since the injury occurred.


"I knew right away," Hayward said. "I heard it, I felt it, and I knew it wasn't just your casual rolled ankle. It was swollen by the time I was leaving the court, so I knew it was definitely worse than normal."

Despite Hayward sitting out of Game 2 and 3, the Celtics have a 3-0 series lead over the 76ers with a chance to sweep the series on Sunday.

Hayward, 30, has a history of leg injuries, most notably in October of 2017 when he fractured his left tibia and dislocated his ankle.

This time around, it isn't so severe but Hayward could most likely miss a Boston second matchup with the NBA champion Toronto Raptors. The Celtics forward is averaging 17.5 points, 6.7 rebounds and 4.1 assists during the regular season while shooting 50-percent from the field and 38.3 percent from 3-point range.


"As far as timeline, it's kind of up in the air," Hayward said. "It's kind of just how my body responds to the rehab and all that stuff. So it's hard to say. No one knows, really."

The Celtics were already prepared to for Hayward to leave and return within a few days for the birth of his fourth child to be with his wife, Robyn at some point in September.


"I think it's two separate things," Hayward said, referring to his injury and the pending family addition. "But it's something I'm taking a look at. It's just very unfortunate of the timing of the whole deal, so I think I'm just trying to take it day by day, and we're looking at scheduling for the baby and all that stuff, so it's taking it day by day."

While Hayward has already gone through a similar rehab process with his opposite ankle, he remains positive and even wishing to have some of that "Disney magic" to get back sooner rather than later. He admits that the mental aspect of this type of this injury could be what is most difficult rather than the physical part.


It's hard," he said when asked about the string of injuries. "It's hard not to get into that. I think teammates, family, mentors, having good people around you, I think helps with all of that, certainly. Like I said, I just try to take it day by day, honestly, and just trying to attack rehab. I've definitely been here before, so I know how to do that.