Brad Stevens on the Celtics after being eliminated by Miami: 'I really appreciated the way they played basketball all year' 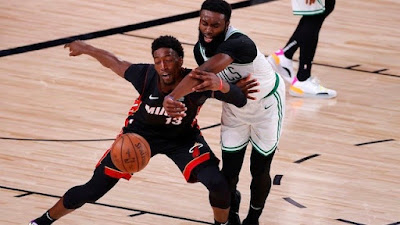 The Celtics are not going back to the NBA Finals after being eliminated by the Miami Heat on Sunday in a 125-113 loss in Game 6.
In the most bizarre season that involved a six months hiatus due to the COVID-19 pandemic, Boston missed a golden opportunity to advance past the Eastern Conference Finals for the first time in a decade to meet their biggest rivals; the Los Angeles Lakers.
Miami withstood a 17-4 Celtics' run in the fourth quarter of Game 6, which resulted in a 96-90 lead -- the first of the night for the C's. But the Heat countered with a 26-6 burst of their own to put away Boston for good and earned the right to represent the East against the Lakers in the Finals.

"They made great plays, credit Miami for that," Celtics head coach Brad Stevens said of the Heat's final run. "I think they're terrific and I think we didn't play as well in those spots. I think they just deserve a lot of credit. Super team, super coach. They're really good. They're going to be a handful."

Bam Adebayo having a career-night of 32 points on 11-of-15 shooting and 14 rebounds didn't help matters much, especially late in that fourth quarter, when the Heat center either scored on will or assisted on what seemed like every basket down the stretch.

"I thought today after we had the lead, Adebayo, and credit all of them, but Adebayo deciding he's just going to drive the ball put us in a real bind with the shooters around him," said Stevens. "Their physicality is something that I'm not sure that we probably talked about it enough. They're strong, they're physical, they're tough and, him in particular, dominated that fourth quarter. Even the plays where he didn't score, his presence was so impactful and it put us in a real bind with the ability to guard him.

"Best thing we did, the best stretch of defense we had all night, maybe the only good stretch of defense, was when we were switching with Grant," added Stevens. "But that got taken and exposed a little bit as well there toward the end of it. Miami deserves a lot of credit. They're super physical, super tough, very, very savvy. I think they're the best team in the East and deserve to be representing the East in the way that they have played."

With the Celtics down 109-102 with 4:30 left to play, it seemed like Boston panicked and settled for quick 3-point attempts that didn't fall instead of attacking the rim; the very thing that kept them in the game all night up to that point.

"I don't think we were pressing (offensively)," Kemba Walker said of the Heat's run to put away the Celtics. "I thought we got some really good looks. They just didn't drop. Whenever we did miss, those guys brought it down with great pace and made the plays necessary to win. That was the difference, they made the plays and we didn't."

Boston never quite recovered after being down 2-0 with significant double-digit leads in both losses and despite their locker room dust-up following Game 2 that led to a Celtics' Game 3 win, a Game 4 victory would have been the key to put any sort of pressure on the Heat, which Miami never felt at all in any of the six games.

Stevens says he doesn't have any regrets on how he coached or how his players handled the series.

"My regrets would be the outcomes," Stevens said. "My regret is not what we put in. My regret is not how we prepared or worked. Or how hard our guys worked or how hard committed they were to playing and staying together. You look back at those first couple of games and it put us in a tough spot. I just think that ultimately, we had our chances but the other team is out there too."

Walker, who had not gotten out of the first round in his previous two trips to the playoffs in 2014 and 2016, is proud of what the Celtics accomplished even if they came up short of their ultimate goal.

"It was a fun run," Walker said. "It's a tough pill to swallow, but we fought hard man. That's all you can ask for. You want guys to compete at a really high level. I'm just really proud of these guys. It's been a really fun year to be around these guys."

Jayson Tatum enjoyed becoming an All-Star for the first time and accepted the challenge of being the No.1 option on a championship contender, while it was only his third year in the league. He found out the hard way that his 24 points and 11 assists in Game 6 was simply not enough when you're the focal point of an opponent's defensive schemes

"It's not easy, it's tough," Tatum told reporters. "But if you want those expectations, you've got to be that guy who’s capable of doing those things, then you've got to through some tough things. Some ups and downs. Some stuff I can learn from. I think I can learn a lot moving forward, from this season and this series."

The glaring issues for the Celtics in the postseason was holding onto big leads in the second-half and poor late fourth quarter execution when the games were close. The Celtics against the Toronto Raptors and Heat were 2-6 in games decided by single-digits.

Walker believes that those issues can be resolved moving forward and he can't wait until next season. which won't be that long of await as it usually is for him.

"You just got to grow," Walker said. "We're going have to figure out how to win those games, down the stretch. We've got time. We're going to be out of here and at some point we'll look back at this and learn. It's all learning experiences. We all just got to have big offseason's, wait to come back and start back up.

"We'll get better," Walker added. "We had a lot of times where a lot of us didn't play together, whether it be injuries or things of that nature. This is our first year together, we'll have some time to grow. This is going to be a fun group."

Tatum agreed with Walker's comments and the fact that the group was really close to still be playing basketball.

"I believe in this group," Tatum said. "I think we're capable. I think we have more than enough to get the job done. We just let a couple slip away.

"I really love playing on this team. It was a lot of fun. A lot of guys got so much better this year and throughout the season. So much better from last season. Just to see guys grow and get better was fun. It was fun this year."

Stevens had one final message to his team of how proud and grateful he was for a wild but great season.

"I appreciated the way they played and found joy and stayed together. We had one minor dust-up, and that's pretty good for a calendar year with a group. That's pretty amazing when you think about it."