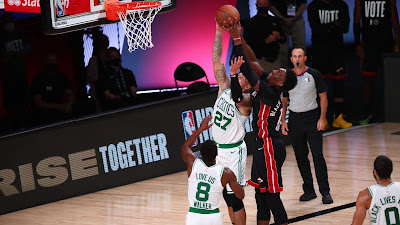 The Celtics' quest to make it out of the Eastern Conference fell short, losing 125-113 to the Miami Heat in Game 6 Sunday night.


Bam Adebayo finished with a career-high 32 points on 11-of-15 shooting, 14 rebounds and 5 assists to lead the Heat back to the NBA Finals for the first time since 2014.

Jimmy Butler scored 22 points and dished out 8 assists, while rookie Tyler Herro shot 8-of-13 for 19 points to along with 7 assists off the bench. Andre Iguodala and Duncan Robinson chipped in 15 a piece for Miami who won the best-of-7 series 4-2 and will move on to face the Los Angeles Lakers.

Jaylen Brown led the Celtics with 26 points on 10-17 shooting, Jayson Tatum notched a double-double of 24 points and a career-high 11 assists. Marcus Smart and Kemba Walker each scored 20 points for Boston -- which has lost in the Eastern Conference Finals for a third time in the last four seasons.

The Celtics grabbed their first lead, 96-90 early in the fourth before the Heat scored six unanswered points to tie it up. Boston took two more leads after that, with Adebayo responding each time, first with an emphatic dunk and then with a go-ahead three-point play with 6:16 left and the Heat never trailed again.

Miami went on a 9-0 run after a pair of Herro baskets to increase their lead to 10 and Adebayo found a cutting Butler while being doubled teamed to put the Heat up 116-102 with 2:40 left to play.

The Heat started off the first quarter shooting 1-of-9 from 3 before they went 5-for-5 to finish the period. Boston hit 11-of-23 3-pointers in the first half and trailed 62-60 at the break.

Iguodala connected on his fourth 3-pointer of the night — going a perfect 4-of-4 from deep with 4:20 left in the third to put the Heat up eight, before Brown scored half of Boston's 10-2 burst to tie it up. Goron Dragic (13 points, 7 assists) made the go-ahead layup to put Miami up 88-86 heading into the final frame.

The Celtics again went on one last 10-2 run to start the fourth, including a fast break dunk by Brown where Butler seemed to have clipped his legs, but no foul was called. Boston's medical staff took a look at his left knee and Brown stayed in the game.

In the end Boston was outscored 35-17 in the final nine-plus minutes and the Celtics shot a whopping 2-of-13 from 3-point territory and 6-of-22 overall from the field to wrap up their season. Miami on the other hand, concluded that last stretch shooting 11-of-14 from the field, 3-of-3 from 3 and 10-of-13 from the free throw line to advance as East champions.

After winning their first six straight playoff games, the Celtics lost seven of the last 11 to conclude their postseason run.

Game 1 of the NBA Finals between the Lakers and Heat is scheduled for Wednesday at 9 pm EST on ABC.