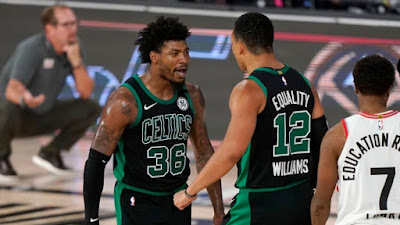 After an 18-point loss in Game 1, the Raptors made adjustments and had a double-digit lead before Marcus Smart scored 16 fourth quarter points to help the Celtics seal a 102-99 victory and take a 2-0 series lead.

Smart only had three points on 1-of-8 shooting and 1-of-6 from behind the arc in the first three quarters, when he hit five straight 3-pointers (turning the last one into a four-point play) in a three minute span to start the final frame -- giving Boston their first lead of the second half and they never looked back.

Jaylen Brown netted 16 points and Robert Williams once again was a perfect 5-5 from the field to chip in 11 points off the bench for the Celtics, who are now 5-1 this season and 3-0 in the bubble against the defending champs.

OG Anunoby had 20 points for Toronto and 19 from Fred VanVleet -- who missed a 28-footer as time expired. Serge Ibaka and Pascal Siakam scored 17 points apiece and Kyle Lowry added 16 for the Raptors.

The Celtics trailed 78-66 with 2:46 left in the third and all the momentum swung in the Raptors' favor, especially after an offensive foul call on Siakam was reversed and Smart picked up the foul instead. Within the next 10:39 Boston used a 27-9 run to secure a lead, while Toronto missed 23 of their final 28 shots.

The Raptors wouldn't go away, as they cut the Celtics' lead down to 95-92 with 3:35 left and got within one following a pair of free throws from Lowry. Toronto wouldn't score again in the last minute of the game, giving the Celtics their sixth straight win to start the postseason.

Boston will look to make it a 3-0 series lead and tie a franchise record of seven straight postseason victories when these two teams tip-off Game 3 on Thursday night.