Gordon Hayward on Game 3 win: 'My ankle's pretty sore, but I'm proud of the way we fought' 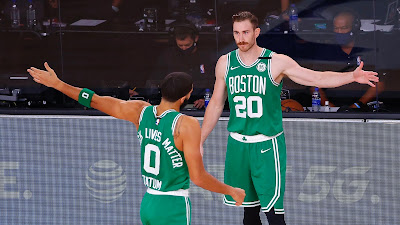 Gordon Hayward provided a spark that the Celtics definitely needed to avoid going down 3-0 in the Eastern Conference Finals.

His stats of 6 points, 5 rebounds, 4 assists, 3 steals and one block in 31 minutes off the bench just doesn't paint the whole picture of the immediate impact made the moment he stepped onto the floor for the first time since August 17.

Hayward, who missed five weeks of playoff basketball after suffering a Grade III ankle sprain, provided lots of energy just with his mere presence in the Celtics' 117-106 Game 3 win over the Miami Heat on Saturday night.


"First five minutes, I was gassed," Hayward said after the game. "I'm extremely tired right now. My ankle's pretty sore, but I'm proud of the way we fought and proud of us getting the win."

Celtics coach Brad Stevens knows all too well the difference Hayward makes and reminded the media that his forward's performance is exactly what he'd done all season long -- making it clear the C's are better when Hayward is in the lineup.


"I thought he did what he's done all year. He didn't shoot it quite as much, but he is a stabilizing force for our team," Stevens told reporters. "He just can make a right play, make a play for somebody else at the right time. And he hit the big three as they were making a run. So, I think it's just, he makes us better that's for sure."

With just over five minutes left in the first quarter, Hayward entered the game and found a cutting Daniel Theis in the paint for an assist on a dunk. He pulled up for a mid-range jumper that he hit a minute later and then subbed out.

Late in the second quarter, Stevens elected to go small, with his five best players of Kemba Walker, Marcus Smart, Jaylen Brown, Hayward and Jayson Tatum. The lineup closed out the half on a 12-2 run to take a 63-50 advantage into the break.

Hayward hit a 3-pointer early in the fourth to push the Celtics' lead to 18 and he entered with 1:03 left to help stop another Miami rally and potential comeback.


"His decision-making, his ability to make plays for others and for himself, it just opens up the floor so much more," said Tatum on Hayward's return. "They've got to respect him, so just having a bunch of guys out there [that a defense] really can't help off of because everybody can shoot, knock down shots, make plays, I think it makes it tough.

"We're so much better when he's out there," Tatum added. "So much more dynamic, so much more versatile."

As for Hayward staying in the NBA bubble for the remainder of the playoffs, the Celtics forward doesn't plan to leave for the birth of son, even if the team were to advance to the Finals. Even though Hayward's feeling disappointed that he'd possibly miss such an important family moment, he discussed the matter with his wife, Robyn, and they both decided it's the right decision to remain with the Celtics in Orlando.


"We discussed it," Hayward said. "I think it's probably best if I stay here and help our team."

The Celtics will have three days off to rest and help Hayward's conditioning to get back into basketball shape, as Game 4 is on Wednesday night at 8:30 pm EST.