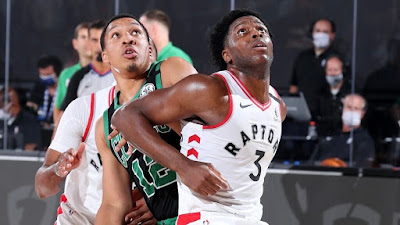 Forward Grant Williams was all smiles following Sunday's shootaround when he spoke for the first time since the Celtics beat the Toronto Raptors 92-87 in Game 7.

The Celtics rookie was asked about his performance, which was an eventful seven minutes of playing time, especially the last couple of possessions - including a late-game partially deflection of Fred VanVleet's 3-pointer that could of tied it all up with 12 seconds left to play.


But Williams knew which question was going to be asked, when it came to him missing two free-throws that could have iced the game just moments before his defensive stop.


"I was wondering when someone would ask me about that," Williams said, with a grin.

With 35 seconds remaining, Williams had went to the free throw line, after Kemba Walker drove into the paint and found him with a difficult pass. Williams tried to lay the ball up, but Kyle Lowry linked Williams' arm and held him down. Lowry was whistled for hi sixth foul of the night and Williams went to the line after the Raptors challenged the call and it was not reversed.


"In the moment, I was happy with the call," Williams said. "I'm ready to go, I tried to stay as warm as possible and be prepared to go in and defend. And that's all I knew I had to do. It wasn't about scoring the basketball in a late game situation. My thing was to get a stop for the team."

Despite Williams saying that he felt good about heading to the free throw line, he would end up missing both attempts.


"I was actually super confident going to the line -- it's just two free throws," Williams said. "Then when I hit back rim, I was like, 'Oh, that's just a back rim. It was a good shot, looked good, felt good.' And then I shot the next one to the same spot and I was like, 'Oh my goodness.' I don't ever remember a time I missed clutch free throws like that."

Luckily for Williams, Jayson Tatum was able to crash the offensive glass to secure the rebound. Tatum was fouled as well while grabbing the offensive board but made one of two free throw attempts, giving the Celtics a three-point lead.


"It was definitely a laughing moment for me when JT got the rebound," Williams said. "I was like thank you JT for saving my career here in Boston."

All jokes aside, Williams stepped up in limited minutes against the Raptors, while the majority of the playing time at the five has gone to Daniel Theis and Robert Williams III. He's been especially effective when Brad Stevens wants to go small and space the floor and he didn't disappoint in Game 7 when his name was called.


"It was a moment that I was supposed to stay ready for, prepare for, especially for that team,” Williams said. "I didn't know if I was playing that night, honestly, because going into the fourth quarter it (seemed) like a night he might throw me in, he might not. Next thing you know, eight minutes are left, Theis got his foul, Rob had just been in. So he turned to me, I guess I had played well, and I went in, tried not to make mistakes, especially in pivotal moments like that. It's not about being the superstar or the hero. It's about just doing things for the team to win."

As Boston is set to face the Heat in the Eastern Conference Finals, don't be surprised if Williams sees some meaningful minutes since he played 23 and 17 minutes in the Celtics' two wins over Miami in the regular season. What Williams might lack in height, that's definitely not case when it comes to his strength and versatility on both ends of the floor.


"It's definitely intense," Williams said. "You look at the regular season, you have a couple of those games, where you could say it's playoff intensity but, when you have seven in a row, that's something that you can't really express or prepare for. It was actually enlightening to see how hard it is to not only win one game but also four games against another talented team. It was definitely a learning moment, a growing moment, not only for myself, but hopefully the guys around me. It's definitely given us the courage to fight through adversity and continue to play basketball and the game that we love and we love to be around each other."

Celtics and Heat are scheduled to tip-off Game 1 Tuesday night beginning at 6:30 pm EST on ESPN.