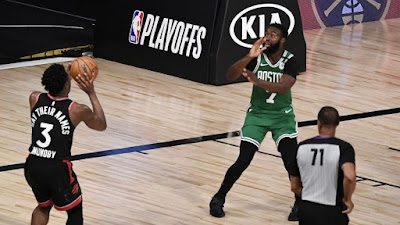 Jaylen Brown was clearly upset after the Celtics Game 3 loss to the Toronto Raptors on a buzzer-beating 3-pointer.

OG Anunoby caught a crosscourt pass from Kyle Lowry and hit a dagger 3 with Brown arriving just a bit late to defend, as the Raptors beat Boston 104-103 to now trail the Eastern Conference semifinals series 2-1.


"That was just a fucking disgrace at the end of the game," Brown said Thursday night after the loss. "That was just terrible. No way we should have lost that game."

With the score tied 101-101 and 21.5 seconds left to play, Kemba Walker avoided a double team and connected on a bounce pass to Daniel Theis who dunked it to put the Celtics up 103-101, leaving 0.5 seconds on the game clock.

The Raptors used their last timeout to draw up a final play, while Walker subbed out for 7-foot-5 center Tacko Fall to defend Toronto's inbounder. Fall's height wasn't enough to disrupt Lowry's long pass into the hands of a roaming Anunoby, who hit the 3 for the win and kept his team alive in the series after being on the brink of elimination.


"We just needed one stop to win the fucking game and we ended up losing," said Brown, who finished with 19 points and 12 rebounds for his first playoff double-double.


Despite Brad Stevens and Walker giving Lowry credit for executing the play, Brown ultimately took responsibility due to being the last to run out and somewhat try to defend Anunoby's game-winning shot.


"Just me being four years in, I got to be better," he said. "Can't give up a three at the end of the game. They made a remarkable shot, still. But it's a fucking disgrace. It's terrible. There's no excuse for it at all. It was ridiculous."

So, is Brown the sole culprit or did something else go wrong for the Celtics on defense during the last play of the game?

When reviewing the last sequence again, Jayson Tatum was guarding Anunoby in front of Boston's bench. As Anunoby begins to cut along the baseline, Marcus Smart tells Tatum to remain in same corner so that he could defend Fred Van Vleet -- which Lowry revealed afterwards that's who the initial play was designed for. Anunoby was left unguarded and was able to get across the baseline to the opposite corner. Once Lowry's pass was in the air, Brown, the closest defender, was caught in a pick set by Marc Gasol in the paint.

Once Brown saw where the ball was heading, he sprinted to Anunoby and jumped with his hand up in an attempt to contest, but it was too late. Anunoby comfortably sunk the 3 and the Toronto bench, who most likely let out a sigh of relief,  celebrated on the court.


"At the end of the day, we just got to be better as a unit," said Brown. "It's the NBA playoffs. Either you let them gain momentum or you come back ready to play next game."

The Celtics, who got their six playoff game win streak snapped, will look to turn the page and prepare for Saturday night's Game 4 against the Raptors -- which is schedule for 6:30 pm EST tip-off.