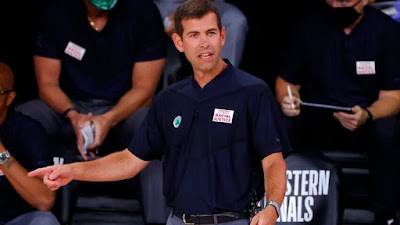 While the Celtics have left the NBA bubble, coach Brad Stevens is excited for what lies ahead which may include the Larry O'Brien one day.
Stevens spoke on Boston's 98.5 The Sports Hub Wednesday and he believes this current group is not far away from winning a title soon.

"I think so much has to go right [to win a title], but I think that this is a really good group," Stevens said. "I feel like this group has a chance to be special, and I think that's really exciting and I'm really hopeful."

Stevens reflected on improvements made by Jayson Tatum, who was a first time All-Star and led the team in scoring at 23.4 points (46 percent shooting) and 7 rebounds per game. And also on Jaylen Brown, who jumped from 13 points and 4.2 boards a season ago to 20 points and 6.4 rebounds this past year.

Both players made strides from the start of the regular season and into the playoffs, according to Stevens and that's a major reason to be hopeful going forward.

"I think that, when you look at Jaylen and Jayson, in particular, those guys' improvement, I look at the first 17 games of the season and compare it to the 17 playoff games when things are ratcheted up, they improved in every statistical metric," Stevens said.

While both rising stars have improved, Stevens has encouraged Tatum and Brown to be even better going into the offseason.

"When you think about that growth in one year's time, it's not enough to stay the same," Stevens said. "It's not enough to expect that because you ended where you ended, you're going to be back there. It's not the case. You have to improve. We all have to improve. Everyone has to get better for us to have a chance to be back where we were and then hopefully move ahead."

The Celtics, who fell 4-2 in the Eastern Conference Finals to the Miami Heat, had one final thing to hear from their head coach Sunday night.

"I appreciated the way they played and found joy and stayed together. We had one minor dust-up, and that's pretty good for a calendar year with a group. That's pretty amazing when you think about it."