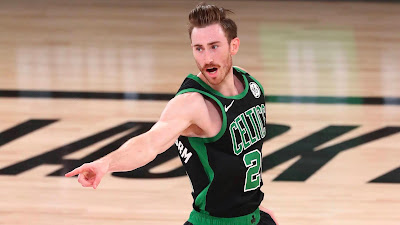 Hayward, who cleared quarantine earlier on Friday, sat on the bench during Boston's 92-87 win over the Toronto Raptors in Game 7. Prior to tip-off, the Celtics forward was out on the court putting up shots with assistant coach Scott Morrison.


"I think he'll be back at some point in that series, but I don't know when," Stevens said after the Celtics eliminated the Raptors in their second-round playoff series.

During the Game 7 broadcast, TNT's Rebecca Haarlow reported that a person within the Celtics told her Hayward is expected to return "sooner rather than later." Hayward was initially ruled out for at least four weeks, following his Grade III ankle sprain suffered back in Game 1 of Boston's first-round series against the Philadelphia 76ers.

Game 1 of the Eastern Conference Finals is scheduled to tip off Tuesday Sept. 15, which would mark Hayward's four-week timeline -- while Game 2 is set for Thursday, Sept. 17 and Game 3 would be on Saturday, Sept. 19.

Hayward re-entered the NBA "bubble" on Sunday, after leaving to rehab back home in Indiana, where his pregnant wife, Robyn and the three kids have been staying during the playoffs. Robyn is due sometime in late September, and Hayward initially told the media he planned to leave the Disney campus for the birth of his fourth child.

While Hayward has not spoken to the media since his return, it is unclear if he still plans on leaving. Should Hayward exit once more, he will have to quarantine again before he can rejoin his teammates.