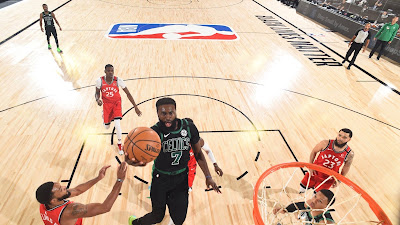 The Celtics went back to what they know best and that's playing hard-nosed defense, as they cruised past the Toronto Raptors 111-89 in Game 5 to take a 3-2 series lead Monday night.

Jaylen Brown, who had a bounce-back performance from a poor shooting display in Game 4 (4-18), went 10-of-18 from the field to lead all scorers with 27 points and the Celtics are one win away from a third trip to the Eastern Conference in four years.

Kemba Walker scored 21 points (8-15) and handed out 8 assists, while Jayson Tatum recorded another double-double of 18 points, 10 rebounds and Daniel Theis added 15 points and 8 rebounds, as Boston's starters outscored the Raptors' starting unit 93-45. Brad Wanamaker netted 15 points off the bench and Marcus Smart chipped in 12 points to go along with 7 rebounds and 6 assists.

Fred VanVleet led Toronto with 18 points and Norman Powell scored 16 for the Raptors, while Pascal Siakam and Kyle Lowry contributed with 10 points apiece. Matt Thomas also had 10 off the bench for the Raptors, who trailed by as many as 30.

The Celtics never gave up a lead and jumped out to an 18-5 advantage within the first 8:53, forcing five turnovers and a couple of airballs for Toronto -- who shot 2-for-15 in that span and never recovered after that. Boston used a 23-7 run to increase their lead 60-32 late in the second quarter.

Despite the Raptors outscoring the Celtics 28-25 in the third period, it didn't make much of difference for Boston, who took a 87-63 lead over the defending champions into the final frame.

Toronto shot 38.8 percent on the night and are now on the brink of going home despite winning the previous two games after being down 2-0 to begin the series. The Raptors are 9-10 all-time in when it comes to facing elimination.

The Celtics will have an opportunity to send Toronto packing on Wednesday when Game 6 is scheduled to tip-off.

The Celtics assisted 23 times on 38 made baskets, while they outscored the Raptors in the paint 48-32 and out-rebounded Toronto for the fifth straight game, 53-43.