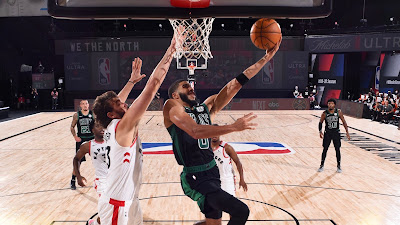 It wasn't easy but the Celtics are heading to the Eastern Conference Finals after beating the Toronto Raptors 92-87 in Game 7 Friday night.

Jayson Tatum led all scorers with 29 points (4-8 from 3) along with a game-high 12 rebounds and 7 assists to help knock off the defending NBA champions.


"If you want to achieve something great, if you want to win, it's not going to be easy," Tatum said after the game. "That's what we're here for."

Jaylen Brown finished with 21 points, 8 rebounds, while Marcus Smart added 16 points and 6 assists. Kemba Walker bounced back after his 5-point performance in Game 6 with 14 points, 6 rebounds and 4 assists for the Celtics -- who will face the fifth seed Miami Heat next week.

Fred VanVleet led Toronto with 20 points, 6 assists and Kyle Lowry added 16 points and 6 rebounds before fouling out late in the fourth quarter. Serge Ibaka chipped in 14 points, 8 rebounds, while Pascal Siakam notched a double-double of 13 points, 11 rebounds and 11 points from Norman Powell off the bench for the Raptors -- who were looking to become the seventh team in NBA history to win four consecutive Game 7′s.

The Celtics used a 13-0 run to take a 19-7 lead in the opening quarter, before Toronto responded with a 10-0 spurt of their own and grabbed a 27-26 advantage to start the second period. Boston finished the half on a 17-6 run and a 50-46 intermission lead.

Boston led by as many as nine in the third quarter and the Raptors clawed back to grab their first lead of the second half, but it was short-lived as the Celtics regained their lead for good and entered the final frame with a 72-71 advantage.

Powell had a chance to tie it on a drive with just under a minute left, as Smart's block saved Boston's 89-87 lead. With 34.4 seconds left, Lowry picked up his sixth foul out on the next possession, a call the Raptors challenged but was unsuccessful -- burning a timeout. Grant Williams missed both free throw attempts, but Powell fouled Tatum going up for the offensive rebound.

Tatum made one-of-two free-throws giving Toronto hope with 7.9 seconds left in a tight Game 7, but the Celtics got a stop on potential game-tying VanVleet 3-point attempt that was partially blocked by the rookie Williams. Walker was fouled immediately, but the All-Star guard calmly sank both free-throws to advance to his first conference finals.

It was the sixth consecutive Game 7 that was decided by five points or less, despite the Celtics converting 18 Toronto turnovers into 31 points, Boston was 9-of-38 from behind the arc and 13-of-23 from the free throw line.

The Celtics will head to the Eastern Conference Finals for the third time in four seasons, as Game 1 against the Heat is scheduled for Tuesday night.

Boston out-rebounded the Raptors 55-52, making it the seventh straight game that the C's won the off the glass battle. The Celtics assisted 19 times on 35 made baskets and become the first team in NBA history to win all four "road games" in a playoff series.