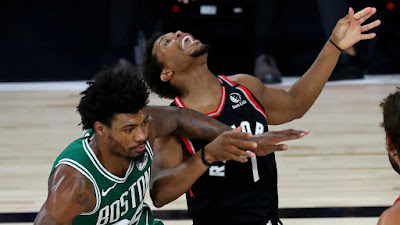 Marcus Smart has received recognition for his defense when the league announced their All-Defensive First and Second Team on Tuesday night.

Smart for the second year in a row has been named to the NBA's All-Defensive First Team, beating out fellow guards Patrick Beverly (LA Clippers) and Eric Bledsoe (Milwaukee). The Celtics defensive anchor joins Defensive Player of the Year; Giannis Antetokounmpo (Milwaukee), Anthony Davis (LA Lakers), Ben Simmons (Philadelphia) and Rudy Gobert (Utah) to round off those that were honored as the five best defensive players in the league.


Despite Smart's 6-foot-3 stature, he's become a defensive nuisance who can defend all positions. Smart becomes the first Celtics player since Rajon Rondo to win back-to-back All-Defensive First Team honors in 2010 and 2011.


Smart is a huge reason why the Celtics were ranked a top-5 defensive rated team this past season and in year six has shown why he received more votes (57 first place votes for 152 points) than Beverly (15 votes) and Bledsoe (15) -- who were named on the NBA's All-Defensive Second Team, along with Bam Adebayo (Miami), Kawhi Leonard (LA Clippers) and Brook Lopez (Milwaukee).