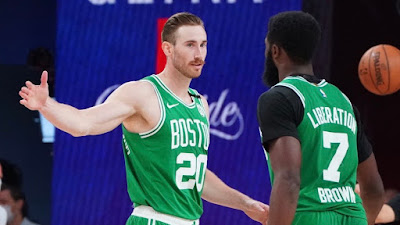 Celtics forward Gordon Hayward wanted to return from a right ankle sprain to help his team advance past the Eastern Conference Finals.

After missing more than five weeks of action, Hayward tried to provide a spark that the Celtics desperately needed against the Miami Heat and did so in Game 3, but for the rest of the series was not exactly the same player before his injury and Boston was eliminated in six games.

Following the Celtics' 125-113 Game 6 loss on Sunday night, Gary Washburn of The Boston Globe reported that Hayward needed more than two additional weeks of rehab to be as close to healthy as possible. But with team trailing 2-0, they couldn't afford to wait those two weeks. According to an NBA source, Hayward "sustained nerve and retinaculum damage in that sprained ankle and he could barely jump."

Hayward, who suffered a Grade III right ankle sprain back on August 17, was basically playing on one leg in the last four games of the East Finals. His average of 10.5 points on 39.8 percent shooting, 4 rebounds and 2.8 assists against the Heat were a far cry from his regular season numbers of 17.5 points on 50-percent shooting from the field, 6.7 rebounds and 4.1 assists.

Still, Hayward played at least 30 minutes in each of the four games against Miami as a secondary playmaker off the bench, but at times he looked like a step behind and struggled as he never appeared to be comfortable in most of his stretches on the floor.

Hayward remained in the NBA bubble even after the birth of his son and clearly wanted to help his teammates in anyway he could.

The former All-Star has a $34.2 million player option that he'll most likely pick up very soon, which will be Hayward's final season of his four-year, $127 million deal he signed back in the summer 2017.