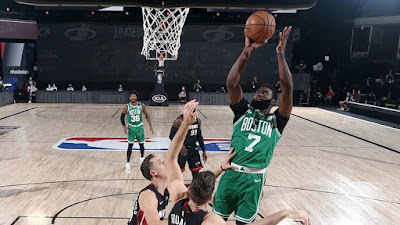 The Celtics finally didn't lose a lead in the third quarter, as they beat the Miami Heat 117-106 in a Game 3 wire-to-wire victory Saturday night and cut their Eastern Conference Finals deficit 2-1.

Jaylen Brown scored a game-high 26 points on 11-of-17 from the field, Jayson Tatum had 25 points and 14 rebounds for another double-double. Kemba Walker added 21 on 8-of-16 shooting and 4-of-8 from 3, while Marcus Smart scored 20 points, including going 10-of-10 from the free throw line to keep Boston alive in this best-of-seven series.

The Celtics, who welcomed Gordon Hayward back into the lineup for the first time since suffering a sprained ankle on August 17, outscored the Heat 60-36 in the paint and led by as many as 20.

Bam Adebayo finished with 27 points and 16 rebounds for Miami, who lost for just the second time in 12 games during these playoffs. Tyler Herro scored 22 points, Jimmy Butler had 17 and Duncan Robinson chipped in 13. The Heat trailed the entire night and were held to 39-percent shooting from the floor.

Boston blew a 14-point lead in Game 1 to lose in overtime and surrendered a 17-point advantage to lose in Game 2, but held off the Heat in the fourth quarter on Saturday -- despite Miami making a late run.

The Heat got within three with 3:22 left in the first half, following Herro hitting a 3-pointer to cap off a 16-point second quarter for the Miami guard. The Celtics forced three consecutive turnovers in a 48 second span to go up 10 and Walker hit a 3 to give Boston a 63-50 advantage at the break.

Miami used a 11-1 run to get within nine with about a minute left in the third, before the Celtics scored seven straight unanswered points to take a 89-74 into the final frame.

Boston would once again get their double-digit lead cut to eight on a Robinson 3-pointer with 1:12 left to play, while Brown committed a flagrant foul on Robinson on the other end. The Heat guard hit 1-of-2 free throws and Adebayo scored on the very next play to cap a 24-9 Miami run, but still trailed 109-104 and that was as close as they would get the rest of the way.

Smart went 9-of-9 from the free-throw line in the fourth quarter, including five straight made from the charity stripe in the last 46.9 seconds to ice the game

The Celtics shot 48.2 percent from the field and held Miami to 12-of-44 shooting from behind the arc. The C's also forced 13 turnovers, including eight steals and converted them into 19 points.


"Our whole team was aggressive," Brad Stevens said after the game. "Our whole team played with the right mentality. And most importantly, responded to their good runs and tough shots really well and then pushed leads out."

Boston will take full advantage of the next three days off to prepare for Game 4 as they look to even the series on Wednesday night. Tip-off is scheduled for 8:30 pm EST.

The Celtics finished with 27 assists on 41 made baskets, with Tatum (8), Smart (6) and Brown (5) leading the way. Hayward, who scored 6 points and grabbed 5 rebounds in 31 minutes, also added 4 assists off the bench.