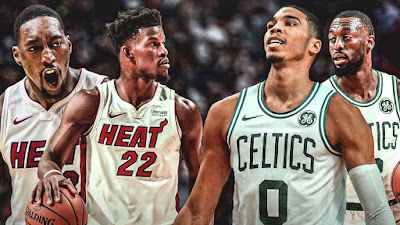 The Celtics are back in the Eastern Conference Finals for the third time in four season and they're facing the Miami Heat, who are back in third round for the first time since 2014.

While both teams haven't met in the East Finals since the days of those epic Big-3 battles featuring Paul Pierce, Kevin Garnett and Ray Allen against LeBron James, Dwayne Wade and Chris Bosh back in 2012, this time around neither team has aging veterans but rather young rising stars.

For the Celtics, despite the young core of Marcus Smart who's 26-years old, Jaylen Brown at 23 and a 22-year old Jayson Tatum -- Boston doesn't lack experience when it comes to playing in a conference finals.

Smart and Brown are returning for a third time in four years and Tatum is making an appearance for a second time since his rookie season, as Kemba Walker gets his first taste of what a conference-final will look like.

The Celtics knocked off the reigning champion Toronto Raptors 92-87 in Game 7 of their Eastern Conference semifinal series Friday night to earn a chance to fight for the East crown against the Heat, who eliminated the top-seeded Milwaukee Bucks in five games.


"We have three 30-year-olds," Celtics coach Brad Stevens said. "We're basically a college team with a couple of guys.

"You know, it's funny. I talk all the time about, you're only scrutinized if you're in the arena. And Jaylen and Jayson, this is all they've done. All they've done is play in, now it'll be three Eastern Conference finals for Jaylen and two for Jayson. And they've been in this stage and they’ve been huge parts of it. They are young in every metric except playoff experience. They have a lot of it."

The Celtics are looking for their first trip to the NBA Finals in a decade, as they've made it to the Eastern Conference Finals three times since 2010, falling to Miami in 2012 and Cleveland in 2017 and 2018 — which means LeBron James has denied Boston it's chance in their last three attempts.


"We didn't come down here just for the first or second round," Tatum said Friday night. "We didn't really pay attention to outside noise, whether we were favored or not. We know what we're capable of and we're just going to go out there and do it."

This year's opportunity to be crowned the East champs will come against the Heat and their All-Star duo of veteran Jimmy Butler and 23-year old Bam Adebayo. The last time Butler met the Celtics in the playoffs was back in 2017 when then Bulls' guard had a 2-0 lead in the first round before Boston won four-straight to advance.

When asked about going up against All-Defensive First Team guard in Smart once again in the postseason, Butler downplayed any type of intensity or animosity that has existed between the two over the past few years.


"He's just another opponent I get the opportunity to go up against," Butler said on Saturday. "I'm not going to sit up here and make this about me versus him. Because that's not the case. I don't think he can win it by himself for the Celtics. I can't win it by myself for the Heat. So we're going to focus in on how we can help our team win and not make it a one-on-one, me-versus-him-versus-me. Nah, not that."

Boston won their regular season series against the Heat 2-1, the last meeting being a 112-106 loss in the bubble seeding games without Butler, as Adebayo notched a double-double of 21 points and 12 rebounds, while second year guard Duncan Robinson also netted 21 points, including five 3-pointers.

The Celtics also expect to have Gordon Hayward back at some point against the Heat after the C's forward returned to the Disney bubble and cleared quarantine. Hayward put up some shots prior to Game 7 tipping-off on Friday night. All signs look encouraging for his return following his Grade III ankle sprain in Boston's playoff opener against the Philadelphia 76ers. Sept. 15 will mark exactly four weeks from when Hayward initially suffered the injury and that was the original timeline given for how long he'd approximately be out to rehab.

This series will be nothing short of entertaining, especially with former Celtic Jae Crowder and Kelly Olynyk adding some interesting storylines. Crowder played three seasons in Boston while Olynyk played four and both were key pieces to 2017 Boston's deep playoff run to the Conference Finals.

Crowder was acquired by the Heat from Memphis at this past February's trade deadline and Olynyk has called South Beach home over the past four years after signing a $50 million deal in free agency in the summer of 2017 following his rookie deal in Boston -- where he was drafted.

Game 1 of the Eastern Conference Finals between the Celtics and Heat is scheduled for Tuesday night at 6:40 pm EST on ESPN.