Gordon Hayward will return to bubble, not expected to play 'anytime soon' 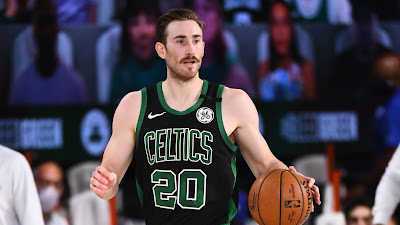 Gordon Hayward is expected to rejoin his Celtics teammates in the NBA bubble, according to coach Brad Stevens.

But don't think Hayward will be playing "anytime soon," as the Celtics forward's presence is only to show his support from the sidelines for now.

Stevens spoke about Hayward's estimated arrival prior to the Celtics tipping-off Game 4 against the Raptors in his pregame video presser, said the forward will have to quarantine for four days before being around the team.


#NEBHInjuryReport Gordon Hayward (ankle) is due back in the bubble tomorrow night and will then quarantine for four days, according to Brad Stevens. Though, he is not expected to play “anytime soon.”
— Boston Celtics (@celtics) September 5, 2020


Hayward, who suffered a Grade III ankle sprain in Game 1 of the Celtics win over the Philadelphia 76ers, will be out for at least a month. Plus, he had planned to leave the Disney campus for the birth of his child, but now he his ready to return.

With Hayward out of the lineup, Marcus Smart has been inserted in his place as a starter, with Brad Wanamaker having an increased role and Semi Ojeleye even playing extended minutes off the bench.

While Smart played primarily as a defensive stopper in round one versus the Sixers, the veteran guard had broken out of an offensive slump in Games 1 and 2 against the Toronto Raptors -- scoring a combined 40 points on 55-percent shooting, before struggling in the Celtics heartbreaking Game 3 loss going just 4-of-15 from the field.

Boston had a 2-0 lead over the Raptors and missed a golden opportunity to be one win away from another trip to the Eastern Conference Finals on Friday night. The Celtics will look to extend their series lead and avoid Toronto using any type of momentum from their buzzer beating win in Game 3, when they tip-off tonight at 6:30 pm EST on TNT.