Brad Stevens on Celtics Game 7 win: 'the two plays of the night were Smart's block and Tatum's rebound' 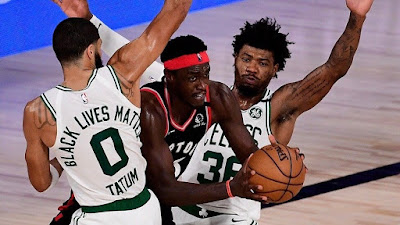 The Celtics are heading back to the Eastern Conference Finals for the third time in four seasons after a huge Game 7 win over the Toronto Raptors Friday night.

The two biggest plays of the game came late in the fourth quarter of the Celtics 92-87 victory off of the hustle of Jayson Tatum and Marcus Smart.

The first came with a minute left and Boston had a 89-87 lead when Tatum missed a layup. Pascal Siakam grabbed the rebound for the Raptors and passed the ball to Norman Powell on the fast break. Meanwhile, Marcus Smart was the last defender back and blocked Powell's layup attempt to deny Toronto from tying the game.


"It's funny because as soon as Norman caught the ball, instantly I remembered the last game that exact same play, he came at me full court and got the and-1," Smart told the media, recalling the play Powell made to put the Raptors up by four with less than a minute left in double overtime of Game 6. "When he caught the ball, in my mind I was just telling myself 'he has to dunk it, I'm not going to give him no foul. I'm just going to meet him up top and see who wins that battle.'

"I bet on myself 110-percent of the time, and I'm First Team All-Defense for a reason, and I believe in that wholeheartedly," Smart added. "My teammates believe in me and in a game like that, at a time like that, they knew, and I knew at the same time that it was going to be hard. I thought I was going to come up with the block and I did."


On the Celtics' next possession, rookie Grant Williams was fouled by Kyle Lowry while attempting to gather himself for a putback. Williams, who's a 72.2 percent free-throw shooter during the regular season – missed both free throws before Tatum crashed the offensive boards for the rebound and was fouled by Powell.

With the Raptors already in the penalty, Tatum went to free throw line and hit 1-of-2, to give the Celtics a 90-87 lead with 34.9 seconds left to play.


"We pride ourselves on competing," Tatum said to reporters on the hustle plays made in the final minutes of Game 7. "Toronto is the same. Neither one of us was going to back down. It was just who wanted it more. Or who could make a bigger play, whether it was Smart with the block or the offensive rebound I got. Just finding a way to impact the game."


"I thought the two plays of the night were Smart's block and Tatum's rebound," Celtics coach Brad Stevens said afterwards. "Those were both incredible effort plays by two of our best players."

Stevens further credited Smart not just for his huge block, but also for other hustle plays made throughout the game. Smart finished with 16 points, 6 assists and three of the Celtics 12 steals in Game 7 -- as Boston converted 18 total Raptors' turnovers into 31 points.


"The hustle. The block. The toughness," Stevens said. "He had a couple of loose balls, he almost came up with another couple of rebounds towards the end of the game. He's a huge part of our team, he's a huge part of our organization. I said this before the playoffs, we've gotten a chance to play in this great event every year he’s been here and it's not a coincidence."

Kemba Walker, who will be heading to the first conference finals of his career, finished with 14 points and 4 assists, as also had praise for Smart's block following the win.


"That block was so special,"Walker said during his postgame presser. "It was unreal. This is why he's First Team All-Defense. He shows it night in, night out. He made so many huge plays tonight. A lot of the things he does just go unnoticed. But that kid, he's special, man. He's on a different level at that end of the basketball court."

Tatum had a complete game recording a game-high in points (29), rebounds (12) and assists (7) to lead the Celtics to a much needed win.


"It's Game 7," Tatum said. "You've got to give it all you've got. You don't want to leave that game and think 'what if' or 'what I could've done.' Leave it all on the floor, and I think that's what we did tonight. You're going to make some mistakes, but we left it all out on the floor and got the result that we wanted."

Walker spoke about how Tatum came up big once again, proving he has grown into his new superstar status throughout these playoffs so far.


"He's a superstar and he showed it tonight," Walker said. "Anybody that had any questions or doubted that, he showed it. Game 7. It's the final game of the series. He got the biggest rebound of this series. Special, special kid. He works hard. He wants to win. He loves playing with his teammates. He was unbelievable tonight."

Stevens complimented Tatum on his game and how he withstood everything the Raptors threw at him throughout the series.


"He just has a great feel for the game," Stevens said. "He's seen a lot of different coverages. In this series, he saw everything you could possibly see. He's done a great job handling it.

"Tatum's really good. He does a lot of really good things," Stevens added.

Stevens also spoke about Jaylen Brown, who scored 21 points and added a game-high 4 steals, as being another piece of this current young core that has been apart of the Celtics success over the last few seasons.


"You're only scrutinized if you're in the arena," Stevens said. "Jaylen and Jayson are just like, this all they've done…now it will be three Eastern Conference Finals for Jaylen and two for Jayson. They've been on this stage and they've been huge parts of it. They're young by every metric except playoff experience. And they have a lot of it. They make winning plays. I thought tonight they made winning plays."

Stevens along with Tatum, Brown and Smart will look to get over the hump this time around to make it to the NBA Finals when the Celtics face the Miami Heat, beginning on Tuesday night.