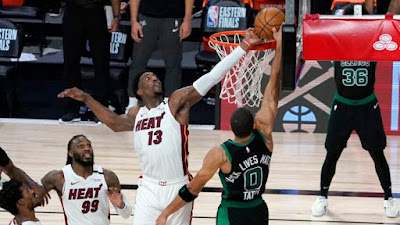 The Celtics blew a double-digit lead in the fourth quarter of Game 1 before heading into overtime and falling 117-114 to the Miami Heat Tuesday night.

Bam Adebayo's biggest block of his career came in the closing seconds of the extra session when he denied Jayson Tatum's game-tying dunk attempt after Jimmy Butler's 3-point play gave the Heat the lead for good on previous possession.

Goran Dragic led Miami with 29 points on 11-of-19 shooting and former Celtic Jae Crowder scored 22. Butler ended up with 20 points and Adebayo had 18 points and 9 assists. Tyler Herro was one assist away from a triple-double to go along with his 12 points and 11 rebounds to help the Heat grab a 1-0 series lead in the Eastern Conference Finals.

Tatum's game-high 30 points and 14 rebounds were not enough, as the Celtics All-Star went a combined 0-7 from the field at the end of regulation and overtime with chances to either tie the game, grab a lead or give Boston a win.

Marcus Smart netted 26 points on 9-18 shooting and hit 6-13 from 3, while Kemba Walker added 19 points and Jaylen Brown chipped in 17 for the C's, who got their seven-game win streak of Game 1 wins snapped.

Boston led 85-71 early in the final frame and didn't lose their lead throughout the period until Butler hit a right corner 3-pointer with 22 seconds left to give Miami a 106-105 edge.

The Celtics tied it immediately after Derrick Jones Jr. was called for an away-from-the-play foul while Miami defended an inbound pass -- Jones ran into Smart for a charge. Tatum went to the line and knotted it up with a free throw, giving Boston a chance to run the clock and get one final game-winning shot attempt.

Tatum got the ball with 7 seconds remaining and shot a 30-foot 3-pointers that came up short at the buzzer to head into overtime.

Walker hit a mid-range basket with 23.2 seconds left in the extra session to put the Celtics up 114-113, before Butler scored in the paint while being fouled by Tatum and made the free throw to give Miami a 116-114 lead with 12 seconds left to play.

Coach Brad Stevens out of timeout ran a play for Tatum, who drove from the top of the key and with the ball cradled, went up to throw down what would have been a ferocious game-tying dunk, only to be blocked by the left hand of Adebayo.

Adebayo was fouled and hit 1-of-2 free throws, before Tatum had one last opportunity to send it to a second overtime on a inbound cross court pass from Smart, but Tatum missed the game-tying 3-pointer to seal the win for Miami

The Celtics jumped out to a 13-point lead in the first quarter limiting Miami to shoot 6-of-22 to start the game. Boston outscored the Heat 27-10 in the last eight minutes of the third quarter and led by 14 in the fourth and even by five in OT, but despite the C's multiple leads, Miami rallied each time and they never led by anymore than six the entire night.

Boston will look to even the series, as Game 2 is scheduled for Thursday night on ESPN, beginning at 7 pm EST.

Celtics shot 44 percent on the night to the Heat's 47 percent, while Miami assisted 32 times on 40 made shots. Boston was also outscored in the paint 48-26 and out-rebounded 55-48. Brad Wanamaker was the only spark off the C's bench -- scoring 11 points, dishing out 6 assists and also having five of the team's nine steals in 25 minutes.