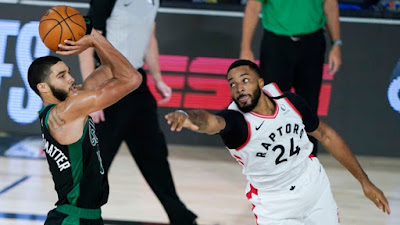 The Celtics and Raptors had not played in a week following the individual sweeps of their respective first round series, before Boston led wire-to-wire to cruise past Toronto 112-94 in Game 1 of the Eastern Conference semifinals on Sunday afternoon.

Jayson Tatum went 9-of-18 from the field for 21 points to along with 9 rebounds, while Marcus Smart also scored 21 points on 6-10 shooting (5-9 from 3) to lead the Celtics to their second blowout win over the Raptors in the NBA bubble.

It was just over three weeks ago when these two teams met and Boston won easily 122-100, handing the Raptors their only other loss in the eight seeding games. The Celtics have now beaten Toronto by a combined 40 points and have not trailed once in both meetings -- giving the Raptors, who have been arguably the best team in Orlando, their second overall loss since the restart.

Kemba Walker continued his efficient shooting touch (6-11 from the field, 4-7 from 3) with 18 points and handed out a playoff career-high 10 assists. Jaylen Brown finished with 17 points and Daniel Theis recorded a double-double of 13 points and 15 rebounds. Robert Williams added 10 points off the bench to give the Celtics a 5-0 start in the postseason and 1-0 series lead.


"They're great defensively," Tatum said of the Raptors. "It's not going to be a game where you can stare down the defense and just attack. We've got to use each other, we've got to move the ball. Obviously there's situations where you got to do that, but for the most part, everybody's got to contribute."

Kyle Lowry had 17 points for Toronto, who were held to 36.9 percent shooting from the floor and 25 percent from 3-point range. Serge Ibaka added 15 points, 9 rebounds and Pascal Siakam scored 13 after picking up his third foul in the first quarter, while OG Anunoby also chipped in 12 points.

The Celtics jumped out to a 11-3 advantage to start the game and led 39-23 to end the first quarter. With 32 seconds left in the first half, Tatum made a steal and went in for dunk and Walker hit a 3-pointer at the top of the key at the buzzer -- giving Boston a 59-42 lead at intermission.

While four Celtics starters were already in double digit scoring, no Raptors starter had reached double figures until 1:26 remaining in the third period. Boston had a 13 point lead and with 3.1 seconds left, Tatum hit a baseline jumper as the clock expired, putting the Celtics up 88-73 heading into the final frame.

The Celtics will look to take a 2-0 series advantage on Tuesday when Game 2 tips-off at 5:30 pm EST on ESPN.