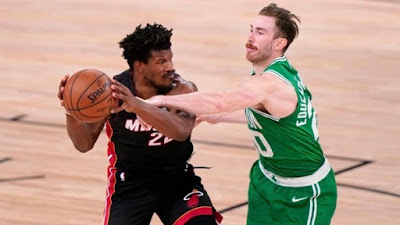 The Celtics missed a golden opportunity to make the Eastern Conference Finals a best-of-three series on Wednesday night, after falling 112-109 to the Miami Heat in Game 4.

Boston now finds themselves with their backs against the ropes, as they trail 3-1 and are on the brink of being sent home for the second time during these playoffs.

After leading in the first half of all three games, including double-digit leads in Game 2 and 3, the Celtics not only couldn't take care of the ball -- committing 11 turnovers, but they also shot 16-40 from the field to trail 50-44 at the break -- their lowest first-half point total of the postseason.


"I thought our first half we looked, for whatever reason, we didn't look crisp," said Celtics head coach Brad Stevens after the game. "And obviously that showed itself in our shooting numbers. I thought we were lucky to be at 50-44 at halftime, to be candid.

"For whatever reason, our first half wasn't as good as it's been."

To make matters worse, All-Star Jayson Tatum went scoreless for the first time in his young playoff career after going 0-6 from the field and did not have a single free throw attempt.


"I wasn't aggressive enough," Tatum said of his disappointing first half performance. "I didn't score in the first half, that's unacceptable. I know I have to play better. That's what I'll try to do."

Tatum finally did get going after hitting his first field goal (3-pointer) midway through the third, on his way to 16 points in the quarter and the Celtics trailed by one after outscoring the Heat 32-27 heading into the fourth.

However, more of the sloppy play from the first half reared its ugly head, when Boston turned the ball over five times within the first five minutes of the final frame. Despite the Celtics taking a very brief 85-84 lead with less than five minutes to play -- their only lead of the second half -- the game ended with the C's committing a total of 19 turnovers to Miami's eight.

Stevens credited the Heat's defense, especially the savoy veterans of Jimmy Butler and Andre Iguodala for slowing down any kind of run for the Celtics late in the fourth.


"They turned us over in the fourth quarter," Stevens said. "Those were huge plays against the zone. A couple of times I thought we just tried to slip through small seams. Jimmy just read the pass. He's done it all playoffs. He's done it against us, he's done it against others. It's easy for me to say 'Be tough with the ball and be strong with the ball.' But those are tough with their hands when you put Iguodala and Jimmy at the top of that zone.

While the Heat continued to force turnovers, Tyler Herro was cooking on the other end -- hitting 6-of-9 from the floor and scoring 17 of his 37 points in the fourth quarter to end the game.


"They do a really good job of trying to set those screens," Stevens said. "A lot of times you want to blitz or switch. They do a good job of getting out of the switches or setting the switches low, specifically on those handbacks, the minute you jump it, he fakes it. It puts you in a real bind.

"Herro's shotmaking tonight, in addition to the things we talked about that were our own issues, was the difference in the game. Jimmy was great late. Adebayo was his typical self. Dragic made some great plays. But Herro was ridiculously good tonight. The rim must have looked like the ocean to him."

Jaylen Brown took the blame for not being more aggressive defensively throughout Game 4, especially when Miami hit key shots late in the fourth.

"It's tough to beat a team when they're making shots and they're comfortable. We've got to set the tone better from the start, and a lot of that's on me."

Tatum scored 12 more points in the fourth to keep the Celtics alive and finished with a team-high 28 points. But despite getting back on track in the final 24 minutes, the C's forward knows his poor play in the first half hurt his team's chances to even the series in Game 4.


"It's tough," Tatum said. "Honestly, they played better than us in the first half. In the second half we picked it up, but they were already in a rhythm and feeling good about themselves. There's a number of guys over there that made good plays. It's tough to come back from.

"We've to play a complete game," Tatum added. "It's win or go home time. I wish I played like that from the start. I take a lot of blame. I didn't play like myself in the first half. So I’ve got to be better."

The Celtics have a tall task of winning three-games in a row and the cliché "we got to take it one-game at a time" has already been thrown around more than once in a couple of the team's postgame comments. Either way, climbing out of a 3-1 hole won't be easy as Game 5 is set for Friday night.