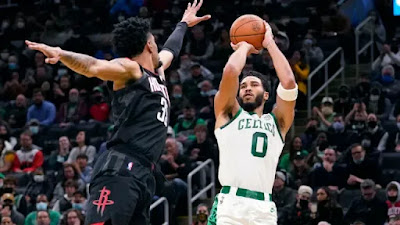 The Celtics continue to take advantage of that home cooking after beating the Houston Rockets 108-90 at TD Garden Monday night to kick-off Thanksgiving week.
Jayson Tatum once again went for 30 points on 10-of-22 from the field, making it his fourth consecutive game of scoring 30 or more. Jaylen Brown made his return after an eight-game absence with a hamstring strain to net 19 points (6-of-13), including going 3-of-6 from 3-point range in 23 minutes of action.
Dennis Schröder added 18 points off the bench for the Celtics, who have won a season-high of three in a row and eight of their last 11. Al Horford recorded another double-double of 11 points and 11 rebounds in route of the Rockets' 15th straight loss.

"We love what the young guys have done and the other guys have done in those roles, but obviously we want to be whole," Boston coach Ime Udoka said. "It's good to get some continuity there to see where we're going to be eventually when we get healthy."

Robert Williams III also returned to the starting lineup after being sidelined with left knee soreness, finished with two points and 15 rebounds in limited playing time for the Celtics, who are now 10-8 on the year.
Armoni Brooks led the Rockets (1-16) with 17 points, while Kenyon Martin Jr. was the only other player to reach double-figures in scoring for Houston with 10 points.
Boston led 52-47 at the break, as Tatum had 22 points in the opening half and the Celtics shot only 40.5% in the first two quarters.
Jaylen Brown got the loudest cheer of the night when he scored 10 straight points in just over a minute during the Celtics 17-2 run to start the third quarter. The All-Star wing dribbled in the lane through two defenders to hit a scoop shot after netting a pair of free throws and capped off the burst with back-to-back 3's in transition that were 24 seconds apart to make it 72-50 with 6:43 left in the third.

"The biggest thing for him was to get his legs under him and feel confident of himself moving on the court," Horford said of Brown in his postgame comments. "Once he was able to get a couple of baskets, you could see that he felt more comfortable with everything. ... That third quarter was a really nice stretch, seeing him moving well."

"This group has played extremely well while I've been out," said Brown during his postgame presser. "I've seen a lot of steps forward from a lot of guys that has me excited about our potential."

The Celtics will wrap up their four-game homestand with a visit from the Eastern Conference leading Brooklyn Nets (13-5) Wednesday night. Tip-off is set for 7:30 on ESPN.

Boston held the Rockets to 37.3% shooting from the floor and 11-of-42 (26.2%) from behind the arc. The Celtics also outrebounded Houston 58-41, while hitting 42.9% of their shot attempts and went 12-of-35 (34.3%) from deep.
Josh Richardson did not play after being downgraded from questionable to out just prior to game time with a non-COVID illness.
Joel Pavón
Follow @Joe1_CSP