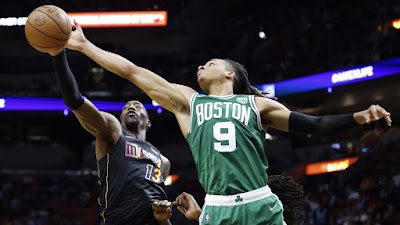 The Celtics beat the Eastern Conference leading Miami Heat 95-78 Thursday at the FTX Arena for their second straight win.
Boston held yet again another opponent to under 80 points on back-to-back nights, becoming the first team to accomplish that feat since the Toronto Raptors in April of 2018, as the the C's improved to 4-5 on the season.
It was a balanced stat sheet for the Celtics, with Jaylen Brown (17) points) leading six players in double-figures, despite the team shooting just 39.7% from the field and 39% from deep. Miami had its lowest scoring output since managing only 74 points against the Oklahoma City Thunder back on Jan. 17, 2006.

"I wouldn't say that's the prototype for us offensively," Celtics coach Ime Udoka said following the win. "Defensively, that's exactly what we want it to look like."

The Celtics' bench of Dennis Schröder (14), Aaron Nesmith (13) and Romeo Langford (12) made the difference -- hitting a combined 14-of-28 from the floor and 6-of-14 from 3, on a night when the starters were struggling offensively -- the C's second unit outscored Miami's 45-20.
The week has taken a drastic turn for the Celtics' defense after giving up 128 points to the Chicago Bulls Monday night at TD Garden, that led to a reported players-only meeting Tuesday, to only giving up an average of 78.5 points on 33% shooting to the Orlando Magic and Heat on consecutive days since.

"Everyone's locked in one through five," Langford said in his postgame presser. "We guard through the whole possession. We limited those guys on second-chance points and guarded them individually."

Jimmy Butler led the Heat, who are now 6-2 on the season, with 20 points on 8-of-18 made attempts and Duncan Robinson added 16 on 5-of-17 shooting, all from the 3-point line. Bam Adebayo was the only other player to score in double-digits with 13 points.
Miami used a 14-2 run in the third quarter to get a 20-point Celtics' lead down to eight, making it 64-56 with 2:30 left in the period. However, Boston weathered the storm by going on a 11-1 spurt of their own to close the third that included a loud dunk by Al Horford (10 points, seven rebounds) and five points from Schröder in that span.
With Kyle Lowry out with a sprained ankle after limping off the court and the Celtics up 75-57 heading into the final frame, Boston held on to a double-digit lead to hand the Heat their worst loss of the young season.
It looked like it was going to be an uphill battle for the Celtics trailing 28-21 a minute and 10 seconds into the second quarter, before they went on an impressive 30-5 run to finish the half and take a 51-33 advantage into the break.
Boston outscored the Heat 33-9 in the second quarter, making it the second-worst second period for Miami in their franchise history scoring wise since December 23, 1995 against the Charlotte Hornets.
The Celtics lead by as many as 26 and limited the Heat to 54 points in the last three quarters, as Miami came into the night averaging 117.1 points per contest -- good for second in the league.

With a 2-0 record since Marcus Smart's controversial comments, the Celtics will look to sweep their three-game mini road trip with a win and return home at .500 when they face the Mavericks in Dallas Saturday night.

Game Notes:
Jayson Tatum scored 10 points on 3-of-13 shooting after going scoreless in the first three quarters and also grabbed eight rebounds. Jaylen Brown didn't play in the fourth due to some tightness in his hamstring, he's most likely day-to-day. Josh Richardson also sat out Thursday with a foot injury.
The last time the Celtics held opposing teams to under 80 points in consecutives games was back in April of 2012.
Joel Pavón
Follow @Joe1_CSP