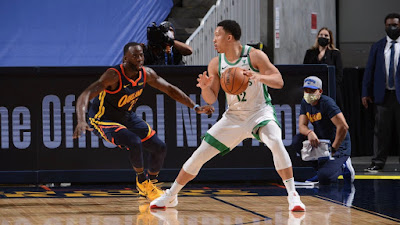 The Celtics kicked-off their five-game west coast trip on a high note, beating the Golden State Warriors 111-107 at the Chase Center Tuesday night.
With the absence of Marcus Smart, who suffered a calf sprain, it was unknown who would seize the opportunity and fill the stat sheet on offense and defense until forward Grant Williams stepped up to the plate to knock it out of the park.
In his best performance of the season, Williams finished with 15 points on 4-of-4 shooting (4-6 from the free throw line) and four rebounds in 27 minutes off the bench.
Williams also had two blocks, one of which was on Stephen Curry (38 points, 11 rebounds) and played the final 16 minutes to provide the little things that otherwise may have been lacking with Smart out.

"I thought he did a lot of good things for us today," said Celtics head coach Brad Stevens. "[The Warriors] are hard because you have to be up on all those screens that (Steph) Curry comes off, which we didn't do a great job of, and then you also have to be physical and protect the paint. Grant gave us a little bit of both of that and I thought he did a good job on the back of our zone communicating. And then he came up with some big rebounds."

His teammates appreciated the fact that Williams was very vocal on the defensive end, something that is typically Smart's job.

"He helped us a lot," said Kemba Walker. "He's really smart. He pays attention to detail. He's constantly yelling out whatever the other team is doing. He's just a real talkative guy out there, and we need that."

It was just this past Saturday night that Williams received a coach's DNP in the Celtics 96-95 loss to the Lakers and it seemed like he's been out of the rotation recently. He barely played any garbage time minutes in the team's blowout win against the Cavaliers and didn't see the floor much in the two-game set against the 76ers either. But with Smart out, Williams' name was called and he didn't disappoint, despite playing scattered minutes as of late.

"Smart, being the heart and soul of our team, being the guy that leads us on that end of the court, with him being out, we have to step up," Williams said. "Not just myself, but Semi (Ojeleye), other guys did a lot of great things tonight. Guys made a lot of good plays. My job was being able to communicate what was coming and be able to help guys understand that there is a priority on the court and make sure to get there and cover each other and have each other's backs."

Williams hit all three of his 3-point attempts and has even taken over as the team leader in 3-point field-goal efficiency at 46.9 percent, something that no one saw coming, especially after missing his first 24 shots from beyond the arc during his rookie season. The Celtics bruiser is clearly showing confidence in taking 3's a year later.

"Definitely more comfortable," Williams said of his shooting from deep. "With this team, you got to take the open look, the one that is available because we have a lot of talented players that get you great looks and you can't be shy to take them. I'm just a little bit more comfortable going through the game, confident in my shot and just trying to continue to grow and progress as time goes on."

While Smart could miss up to three weeks, the Celtics are going to rely more on Williams' ability to shoot the long ball throughout this western swing and beyond.

"I trust him," said Jayson Tatum, who scored a team-high 27 points. "We trust him in the biggest moments to come in and do what we need him to do. And that's to make winning plays."