Danny Ainge defends Brad Stevens, says 'My coach is more prepared and humble than anybody' 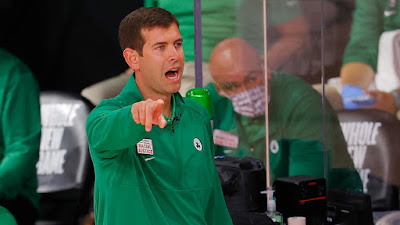 The Celtics have dropped 11 of their last 17 games, including a 122-114 loss to the Atlanta Hawks at home Wednesday night.
While it doesn't seem likely that coach Brad Stevens will lose his job anytime soon, his roster has been inconsistent so far this season and at 14-14 they also look unmotivated as of late.
Danny Ainge made his weekly appearance on Boston's 98.5 The Sports Hub Thursday morning to defend Stevens in light of the Celtics' recent struggles, especially against teams that have well below .500 records.

"My coach is more prepared and humble than anybody. He respects Washington [Wizards] and Detroit [Pistons] more than anybody in that entire locker room," Ainge said on the "Toucher and Rich" program. "It has to do with the players. I think it's just a maturity issue with the team."

The Celtics president of basketball operations believes that the teams playoff success over the last few seasons, despite having yet clinch an NBA Finals berth, may have gotten to the younger players' heads.

"It's always a fear I have when you have a little bit of success, you know, you just you're not quite humble enough and respect your opponent. And I don't think we respected our opponent enough. It's that simple. It has nothing to do with coaching," Ainge said.

Earlier this week Ainge took responsibility for the roster's inconsistencies, stating "That's not on Brad."

"That is 100 percent on me, meaning that the players that we have selected to be on the team, and it's on them individually," said Ainge in an interview with the Boston Herald. The last person this is on is the most humble, hard-working person in the entire organization, and that is Brad Stevens."

Ainge shot down the notion that Stevens has lost the team which has led to the immaturity of some players, calling those reports simply an exaggeration by the media.

"I just think that’s the culture of sports and sports reporting. I don't see that at all," he said. "We had a really good game the other night against Denver. And last night I thought we were actually playing pretty well early. And I don’t think it has anything to do with listening to a head coach. I mean, I'm around the team every day and I just I don't see that at all. And I don't - we have a coach that has our guys prepared."

The question of the interview came with a straight answer from Ainge when asked flat out if he thought the Celtics could win a championship as currently constructed.
"I do not," said Ainge, as he was asked a follow up, if he thinks the roster needs more to actually contend this season, to which he replied: "Yes. Yeah I do."

"Our roster obviously is not good. I mean, we are 14-14 team. There's no if' and's or but's about it. That's who we are," Ainge said. "This team, we are 14-14, if there's somebody to blame, this is Danny Ainge to blame. This is not Brad Stevens. It's not Jayson Tatum or Jaylen Brown. It's like not good enough right now. And we all know that. We need to get better."

As for the All-Star Game, the league officially announced Thursday it will take place on March 7 in Atlanta, Ainge shared his thoughts on if he'd preferred any of his players to participate -- mainly Jaylen Brown and Jayson Tatum, who most likely are bound to be selected this year.

Healthy players are contractually obligated to play in the All-Star Game or face being fined by the league.
Joel Pavón
Follow @Joe1_CSP