Gordon Hayward opens up about Celtics career, injuries on the 'Woj Pod' 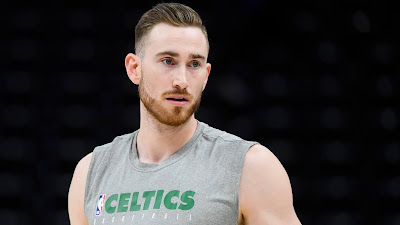 It was the summer of 2017. July 4th to be exact. Only one year after signing Al Horford to a max-contract, the Celtics reached an agreement with Gordon Hayward to reunite him with his college coach Brad Stevens.
Signing him to a four year, $128 million deal with the fourth year being a player-option, there was certainly a lot of confidence in Hayward's ability to take the Celtics to the next level.
Later acquiring Kyrie Irving in a blockbuster trade that same off-season, Boston was instantly considered to be one of the NBA's best teams and became an instant championship contender.
Even prior to acquiring Irving, Hayward was excited for what the future held in Boston. Reuniting with Stevens and joining a historic franchise, he hoped to be with the Celtics long-term and build his own legacy in arguably one of the biggest storied sports cities.

"I'm not somebody that likes a lot of change or likes to move from city to city or team to team. We were making a decision for me to play my basketball career out. Actually at the time, I don't know if you recall, I had signed in Boston and they still had Isaiah Thomas, so it would have been IT with me and Al, Jae Crowder, and Avery Bradley. It was kind of a different team when I signed there, but certainly with Brad I felt that this was going to be where I spent the rest of my career," said Hayward in a recent interview with ESPN's Adrian Wojnarowski on The Woj Pod.

Excitement was building on opening night in Cleveland with the Celtics debuting their Jayson Tatum-Jaylen Brown-- Hayward-- Irving-- Horford lineup. With Irving facing his former team, and the Celtics' two promising young talents playing together for the first time against LeBron James, it was supposed to be one of the most entertaining matchups of the season. Except it didn't exactly turn out that way.
Off a simple ally-oop attempt from Irving to Hayward, the Celtics and Hayward's fates would drastically change over the next few years.
Landing awkwardly on his left ankle, players on both sides instantly looked away knowing the severity of the injury. Similar to Paul George's severe injury with Team USA in 2014, Hayward's injury created concern league wide. Less than five minutes into his Celtics debut, Hayward would miss the rest of the 2017-18 season. With a long recovery ahead, it was unclear whether he would be able to return to All-Star form.
Hayward struggled to find his footing in Boston the following season, scoring the lowest scoring total of his career since his rookie season as he averaged only 11.5 points per game. Lacking confidence and visibly far from 100 percent, it was easy to see why the Celtics struggled during the 2018-19 season despite having one of the most talented rosters in the league.
With Hayward trying to find his rhythm, and much of the roster struggling to contribute in their roles, particularly the young players, many created a narrative that Hayward was receiving "special treatment" from coach Brad Stevens, who people believed focused too much on integrating Hayward into the offense.
Looking back at the situation in Boston, Gordon Hayward doesn't believe that was the case.

"I don't quite understand how people could say that coach Brad treated me I guess differently. I mean I came off the bench basically the whole year, probably had the lowest amount of usage that I've had since my second or third year in the NBA. Played the least amount of minutes, so I don't know how any of that was justified," said Hayward.

Being one of the deepest teams in the league, there were high expectations for the 2018 Celtics which created its fair share of drama. With Hayward receiving nearly 26 minutes per game, players like Brown, Tatum, and Terry Rozier all were forced into different roles after playing prominent roles in the 2017 playoff run. That created belief that there was tension and a sense of resentment towards Hayward from the Celtics' young core. However, during Hayward's tenure he never noticed any of what the fans and media perceived about the situation in the locker room.

"I didn't feel anything from different guys or in the locker room. I felt more than anything was the outside media, maybe what guys had said to the outside media. The situation as a whole as a whole team there was just a difficult situation. You had both me and Kyrie coming back from injuries at the same time and we had probably four or five, maybe even six guys that were really talented players that could use the ball and have high usage, and feel like they should be the ones with the ball. We just had an extremely talented team and didn't have much time to gel or build any sort of chemistry," said Hayward.

Fast forward to his last season in Boston and similar to his first season with the team, Hayward suffered another ankle injury in Game 1 of the Eastern Conference Quarterfinals. While he was able to return in time for the final four games of the Eastern Conference Finals, Hayward clearly didn't look like himself. Finally looking like the player the Celtics hoped they were getting when they first signed him during the regular season, the injury was a big setback in his last games as a Celtic.
Taking up to a week of rehabbing in his hotel room once he returned to the Disney bubble, Hayward was far from being at full health. Unable to jog until the fourth day of returning to Orlando, he knew that he wasn't healthy enough to play.

"Physically from a health standpoint, absolutely not. I had no business being out there on the court at all," said Hayward when he was asked if he should have returned. "My injury was I think was much more severe than people understood. Literally as soon as I got to the bubble I hadn't even run yet."

With the Celtics falling down 0-2 to the Miami Heat, Hayward felt an obligation to come back and give his team a much-needed spark. Also considering a spot in the NBA Finals being on the line, there was plenty of motivation to fight through the injury and play for a championship.
Thinking back to the severe injury he suffered on opening night a few years ago, Hayward's decision to return from this ankle injury was made with the team's playoff run in mind. With his competitive spirit driving him, he wanted to play through the pain in the most important playoff series of his career.

"I think certainly you know what your body is capable of a little more, but I kind of think all bets are off in the playoffs. It's one of those things where you're trying to do whatever you can to give your team whatever you can give them. I knew that I wasn't right. I could just feel it like I said going into it, it was one of things where I just started to run so it was something that I knew I wasn't 100 percent, but it's one of those things where in the playoffs you got to just give what you can."

When making his free-agent decision this past off-season, there was a lot for Hayward to consider. Should he opt-in, he would be guaranteed to earn over $30 million. However, if he elected to test the free-agent market, he could be settling for much less. It was a risk Hayward was willing to take and it all worked out as he agreed to a four year, $120 million contract with the Charlotte Hornets as a part of a sign-and-trade with the Celtics.
The signing signaled the end of a disappointing stint with the Celtics which resulted in no championships and a series of injuries. Taking a look back at his time in Boston, Hayward acknowledged the difficulty of leaving a city he called home for three years and opened up about what it was like starting a new chapter in his playing career.

"It was a really tough decision. Through everything that happened to me in Boston, it was something that I'll always remember. Playing at the Garden, playing for the Boston Celtics. That's something you dream about as a kid, especially from Indiana with Larry Bird. I have nothing but positive things to say about my time in Boston. Although like I said it was frustrating and disappointing with I think how it all ended up, with injuries certainly playing a huge part of that. It was an extremely difficult decision and leaving a place too, where I've built some great relationships," said Hayward.

Enjoying a bounce-back year in Charlotte averaging over 22 points a game, Hayward has turned the page on his Celtics career looking more like his pre-injury form. While his tenure in Boston didn't end like he anticipated, overcoming the biggest obstacle of his basketball career to playing through an injury for the team's playoff run, Hayward showed he gave the Celtics everything he had to the very end -- a testament to his character and respect for his teammates.
Ian Carrano
Follow @IC_Sports1