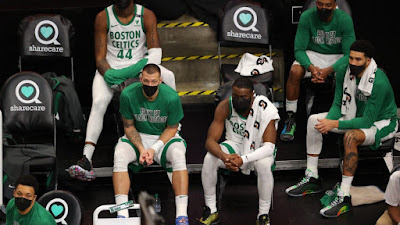 The term 'rock-bottom' took on a new meaning for the Celtics Wednesday night, in route of a 127-112 road loss to the Atlanta Hawks.
While it may seem like this current roster at times has tuned out head coach Brad Stevens, All-Star Jaylen Brown say that's not at all the case.

"We listen to him," Brown said postgame. "Obviously game to game things change, but you've got to execute each and every night, and I think it's been a challenge for this group to go from game to game with no time in between and execute the game plans. I can tell whatever the focus is, it's not there. It's not enough."

The Celtics went 0-3 on their mini-road trip and their beating at the hands of the Hawks, where they were down by 20 in the second quarter and by as many as 27 later in the game, may not have been their worst loss. That award goes to the New Orleans Pelicans this past Sunday, as Boston blew a 24-point lead in the third quarter to lose 120-115 in overtime.
All-Star Jayson Tatum, who finished with a team-high 32 that afternoon, only scored 13 in Atlanta.

"We have to take some accountability," Tatum said during his Zoom press conference. "I have to take accountability as one of the leaders and being that guy. I have to be better. I have to be more vocal. I have to kind of be the example, especially knowing that we lost two tough games, playing a back-to-back. I take a lot of accountability for just the way we played today, I guess and have been playing. We got four games till the break. Four very important games because I think the time is now. We don’t have much time, or we don’t have any time to relax. We’ve got to dig deep and we’ve got to figure it out."

With the Celtics at 15-17 on the season and having dropped eight of their last 11 games, Stevens may have to change the tone of voice when it comes to speaking with his roster.

"I would say what I say to you and everyone else is not what I say in the locker room, necessarily," Stevens said via his postgame conference with reporters. "And how you say it is certainly very important, and I've had my moments. Let’s put it that way. That said, I think this team looks like, right now, it’s balancing playing unconfidently and unsure with the fact that we've had a couple that slipped away.

"Listen, none of us are happy with the job that we have done, and I should be first and foremost on that list with where we are."

Brown also added that playing for an storied franchise like the Celtics, no one should be pleased when their recent string of losses.

"As long as you've got that Celtics jersey on, you should never be comfortable with losing,” Brown said. "I'm uncomfortable. It sucks for me personally. And we should all as a group just take the challenge."

With four games remaining before the All-Star break, the Celtics will get a chance to turn it around beginning on Friday when they host the Indiana Pacers (15-15) at TD Garden.