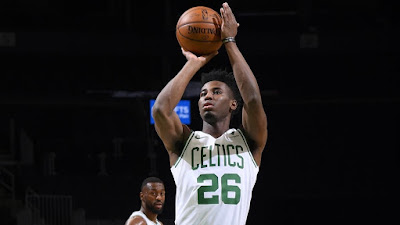 Aaron Nesmith had his best game of the season, as Boston beat the Denver Nuggets 112-99 Tuesday night TD Garden.
The Celtics rookie led the bench in minutes played (24), points (9) on 3-of-4 from the free throw line and 2-of-4 from 3. But one of the biggest plays of the night for Nesmith came early in the fourth quarter when he dove onto the floor for a loose ball -- that was knocked away by Javonte Green near the paint of the Nuggets' basket -- and in an attempt to save it from going out of bounds, the rook's hustle play stopped Denver from cutting further into Boston's 88-79 advantage with 10:09 left.

That would be the closet the Nuggets would get the rest of the game, as the Celtics maintained a good size lead to get the double-digit victory and snap a two game skid.

"I think it was a momentum changer. Plays like that always get the team hyped. The team that turns it over, they kinda put their heads down and walk back on defense," Nesmith said of his dive for the ball. "We took advantage of that. I think we scored. Payton had an and-1. That play straight into an and-1 is pretty demoralizing for the opposing team."

Its that type of defense and hitting shots on offense that will get Nesmith more playing time, especially with coach Brad Stevens needing his roster to step up consistently.

"He's obviously becoming more comfortable with the speed of the game on the offensive end," said Stevens in his postgame presser. "That was probably the biggest transition for him. He's handled that well. Credit to him. He’s just kept working. When a guy gets that opportunity, you really want to see him succeed and that’s two good games in a row."

For the second straight game Nesmith was the first player off the bench for Stevens, which is a good sign that the rookie has been working hard and it's paying off.

"It feels good to be able to go out there and play and participate towards winning games and trying to make winning plays," Nesmith said. "Just trying to make the most of the opportunities that I'm given."

Nesmith noted that he tries to be the first player in the gym to get up as many shots as possible to stay ready whenever he's called upon, as the Celtics guard continues to get more opportunities.

"I'm just trying to do whatever the team needs me to do. In the game, sometimes, we need energy. There's no crowd. There's no fans. For some guys, it's hard to get up and play with a lot of energy," Nesmith said. "Coming off the bench, for the starters, for the rest of the team, I'm just trying to be an energy boost and an energy guy, a guy that helps other guys play harder, a guys that helps us towards winning."

The Celtics also got key contributions from their other rookie Payton Pritchard, who finished with eight points and seven assists (team's second leading passer), while Robert Williams III also chipped in eight points (4-for-4 shooting) and grabbed eight rebounds, as the second unit scored a total of 30 points.
Joel Pavón
Follow @Joe1_CSP