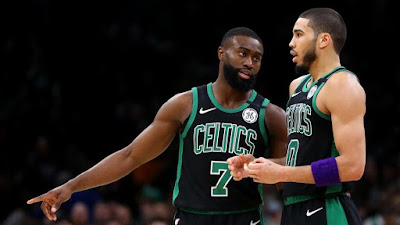 The NBA released the first returns of All-Star fan voting Thursday, with both Jayson Tatum and Jaylen Brown currently in fourth as far as individual positions.
Tatum is right above Miami Heat All-Star duo of Jimmy Butler and Bam Adebayo among the top-10 of frontcourt votes, while also sitting five spots higher than former Celtics teammate Gordon Hayward.
Brown, who has been considered a guard by voting standards, is ahead of Zach LaVine, Trae Young and Collin Sexton. The Celtics wing is clearly having the best season of his career and has been a force on both ends of the floor.


All-Star fan voting opened up on January 28 and will go through February 16, as the two leading scorers for the Celtics have plenty of time to receive more votes and most likely rise in their respective positional rakings.
Tatum, who is averaging 26.8 points, 7.3 rebounds, 4.1 assists and 1.2 steals per game this season, would become an All-Star for the second straight year, while Brown is averaging 26.4 points, 5.5 rebounds, 3.6 assists and 1.3 steals per contest -- is seeking his first All-Star selection.
Fan voting only counts for 50% of the final vote, with 25% coming from media voters, and the final 25% is split up of player votes. The top-three frontcourt players and top-two guards in each conference will be announced as All-Star starters once all votes have been officially counted.

The NBA and the NBPA have agreed to host the an All-Star game this year in Atlanta and is reportedly schedule for March 7 at the Hawks' State Farm Arena.