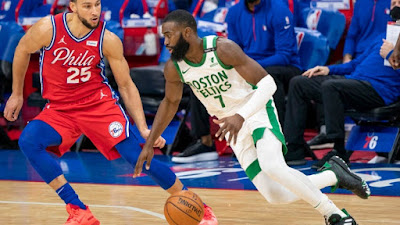 With hopes of avenging Wednesday night's loss to the 76ers, the Celtics fell 122-110 and dropped their third-straight defeat Friday night in Philadelphia, despite Jaylen Brown's electrifying offensive performance.
Brown tied his career-high with 42 points (16-28 shooting), while Kemba Walker added 19 points (8/16) in his third game of the season. Marcus Smart tallied 20 points for the second-straight game while leading the team in assists (7).
Missing Jayson Tatum for the fourth-straight game, Brown stepped up in his absence, knocking down five three-pointers on a night where most of the rotation struggled to get anything going offensively. Outside of Boston's core rotational players, Daniel Theis and Javonte Green were the Celtics' next leading scorers with seven points apiece.
Although Brown's offensive performance was encouraging, his main concern after the game was on the defensive end—an area the Celtics have struggled in this season.

"A lot of that is on me, I'm one of the defensive leaders and captains on this team. I got to be a better leader on that side of the ball," said Brown in his postgame presser. "We gotta have that villainous mentality on defense. We have to follow Smart's lead and I gotta do a better job as a leader on that side of the ball, really making an impact on the defensive side like I know I can."

Brown came out firing in the first quarter, finishing with a team-high 10 points (4/6 shooting), which helped fuel the Celtics' 16-4 run to end the quarter. Leading Boston to a 52-49 lead at the half, Brown's 17 points were crucial for the Celtics' offense after Payton Pritchard's right knee injury depleted their second unit.

"Obviously tonight he killed it offensively. I wish we could have helped him better on the opposite end, on both ends. He could have used some help. Jaylen's playing, he's hooping on both ends. I know he’s saying he can do a little more but there’s only so much he can do," said Kemba Walker.

Much like the first quarter, Brown came out firing in the second half with a 13- point third quarter. Scoring on back-to-back possessions less than four minutes into the half, Brown's highlight of the night featured an acrobatic reverse finish off the glass to push his scoring total to 26 points. Unfortunately for the Celtics, a 42- point third quarter gave Philadelphia an 11- point advantage heading into the fourth.
Brown continued to pour it on in the fourth quarter with 12 points, but it wasn't enough to overtake the 76ers. Outscoring the Celtics 19-10 in the final 4:32, Boston simply didn't have enough to keep up with Joel Embiid's 38 point, 11 rebound performance. Tobias Harris finished with 23 points (3-3 from 3) and Ben Simmons came alive in the fourth, scoring seven of his 15 points in the final minutes to give the Sixers a 11-5 start to the season.

Sitting at 8-6 and 4th place in the Eastern Conference after the loss, the Celtics know they have to find some cohesion in order to compete with the best in the league.

"We've got some work to do. We just have to be better as a group executing. Sharing the basketball, making the right plays, being in the right positions. We’re just not doing it consistently. That's what's hurting us," said Walker. "It just hasn't been good. We haven't played at the level we know we can play at. If we keep playing how we’ve been playing, it's just not going to work."

Considering their recent struggles, Brown and his Celtics teammates hope to have Tatum back in the lineup Sunday against Cleveland.
The Celtics will return to TD Garden to tip-off against the Cavaliers at 7:00 p.m EST on NBCSports-Boston.
Game Notes:
The Celtics shot 45.6% from the field compared to the 76ers who shot 55.6% from the field. Boston was also outrebounded by the Sixers 45-32. Philadelphia committed 19 turnovers while the C's committed only 11 turnovers.